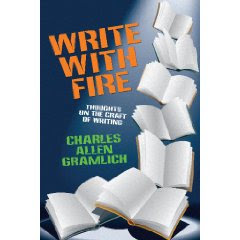 Our friend Charles Gramlich has a new book out, Write With Fire. All of you who read Charles's blog that the man is full of truly excellent advice on everything about the writing life from craft to career.

Letting the Monster Out 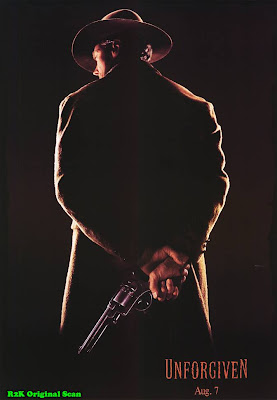 Recently, Charles expressed his disappointment in a story he read. The lead character (name of Edge), a cold-eyed killer (and borderline psychopath) now retired, spends most of the book trying to stay out of trouble. Until, of course, it's time to strap on his guns again.

The formula is tried and true. Shane. Pale Rider. Unforgiven. Sin City: A Dame to Kill For. The Big Boss. Hell, the true story of Cincinnatus. One of drama's favorite 'guns on the mantelpiece' is the bad-ass who's trying to hold back.

The book Charles read didn't work, and I thought I knew why. The hero's arc failed in two places: the start and the end.

Drama is about contrast. No matter what genre, the hero or heroine ends the story in a very different place from where they started. Bridget Jones starts her story miserable, alone and embarrassed at the turkey curry buffet, and she ends the next Christmas happy, in love and immune to anything her mother might say. We meet Harry Potter unloved, disregarded and the absolute bottom of the heap, positively hated by his adoptive parents and living in a cupboard under the stairs. By the end of that first story, he is the hero of his school, loved by all. Othello, on the other hand, starts his story a celebrated hero, saviour of the city with the most beautiful woman he's ever seen for his bride. By the end, both he and Desdemona are dead by his own hand.

Rule of thumb: the lower the hero starts, the higher he'll end up. Or vice versa. Sometimes, it can be both. The detective may end the story with all the answers and his life in ruins. All I'm saying, there's a reason you see a lot more rags-to-riches stories than rags-to-lower middle class.

Back to the Retired Gunslinger. This character always starts as a bad-ass held in check. Always.

Shane and the Preacher (the Mysterious Stranger in Pale Rider) are both introduced fronting off groups of thugs with little more than an icy glare and a palpable sense of menace. How do we know they're bad-asses? Groups of asshole bullies take one look at them and run away.

Chen (Bruce Lee's character in The Big Boss) and Dwight from A Dame to Kill For show the natures they're hiding in action. When Chen's cousins end up in a fight, Bruce Lee uses grace, skill and a deft comic touch to show us that he really could've whupped those bullies butts the whole time, only he promised his momma he wouldn't fight. Dwight stops an attempted murder with a single knockout blow, and his voiceover tells us directly how much he enjoys it, how tempting it is to 'let the monster out'. We soon learn he no longer drinks, smokes, won't even let himself exceed the speed limit for fear he'll turn that monster inside him loose. 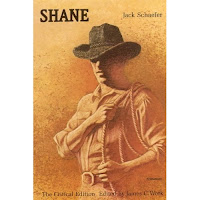 Remember: the Retired Gunfighter is *not* a changed man. He may think he is. He may argue that he is, act like he is, do everything he believes a changed man would do. But *we* need to see that old Monster still lurking under his skin, sniffing the air and waiting for a chance to slip its chain.

We need to see that no matter how much the Retired Gunfighter might lie to himself, whatever it might cost him, part of him wants that monster loose.

And when our hero does finally let that monster out, WATCH OUT! We've watched our hero suffer through three-quarters of the story resisting his natural urges. His half-measure compromises have failed: the monster inside gloated and the villains still won. In the end, there's nothing left for it but to cut loose.

Shane guns down the hired killer, the ranch boss and everyone else in the saloon that night. Preacher blows up a strip-mine and wipes out the villain's whole gang. Dwight comes back with a brand new face, a duffel bag full of explosives, a ninja accomplice and a .25 automatic tucked up his sleeve. And in The Big Boss, Bruce Lee stabs the local drug lord to death with his own fingers.

I'm thinking this is why the book Charles read failed. The killer, Edge, starts out pretty whimpy (okay, cool), but he goes wrong in one important way. Maybe more: I don't know if we get to see what total bad-assery he's holding back, or if we get a sense for how very badly he wants to let that beast free. But I do know this: he carries his gun with him in a carpet bag.

To me, that's a fatal flaw.

And when the rough stuff does start again, he emerges quite a bit less violent than he used to be, with a greater regard for law and order. Wtf?

I call it 'muted arc', or rags-to-lower middle class: the character's changes simply aren't big enough. By keeping his pistol nearby (though not on his hip), Edge is making a definite statement. Contrast it with Preacher in the Pale Rider, who needs days of hard riding to reach the steel box where he's locked away his guns.

And Shane, Preacher, Chen, Dwight, any Retired Gunslinger you can 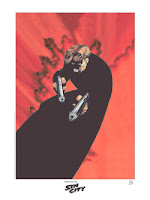 think of, all give us a sense that their violence at the end is worse than they ever were back in their bad old days. They may suffer for unleashing their violence (Shane is badly wounded, maybe fatally. Chen goes to prison.), or they may simply have to live with this poisonous knowledge about themselves.

No way should it actually be better. Shane can't strap on his guns, give the hired killer a flesh wound and have the ranch owner surrender without further bloodshed. And then go off with the lesson that the answer is moderate amounts of violence...
Posted by Steve Malley at 2:54 PM 7 comments:

Email ThisBlogThis!Share to TwitterShare to FacebookShare to Pinterest
Labels: action, in which the artist provides examples delightful and frightful, never settle for less than your best, sin city, story, three act structure

The tabby adopted us gradually. The latest Secret Headquarters has a cat door, so it was no surprise that at least a few li'l folks around the neighborhood use the Secret Headquarters as a Midnight Snack Bar. Only one was brave enough to raid the food bowls while the People were still awake.

Every now and then we'd catch a dark and tawny glimpse of our little raider. At first, any eye contact, the slightest movement, and the little stranger was gone. By slow, painful degrees, he learned that no one here meant him any harm. He also learned that breakfast is a fine meal for Midge and Butler, and that three dishes could go out as easily as two.

Before I knew it, he was sleeping in the house at night. One morning, bribed with fresh fish, he let me pet him. For maybe three seconds.

Did he have a home? Did anyone miss him? If he didn't have another family, where did he go when he left? Was I taking in a stray or stealing someone's beloved pet? I gave the little fellah the freedom of the house, long as he played nice with the others. As it happened, he was pretty mellow and played well with others. (Not 'played' the way Butler does-- I once saw him scare the hell out of a German Shepherd-- but you know, nicely.)

We got used to having the little guy around. Still not officially part of the household, he didn't have a name. I called him Tabby Cat, Buddy, Little Man.

One night he didn't show up for bedtime. The next morning, he wasn't at breakfast. No sign of him all the next day. I told myself he'd gone back to his 'other family', that it was just as well we hadn't named him anyway.

It was cold that night, the rain like ice. I heard the cat flap and ran to open the lounge door. Nothing. I moved further down the dark hallway. Wet fur brushed my leg in passing. My little buddy was home.

And limping. His right front paw was in bad shape, and one side of his face was covered in blood. He'd been hit by a car. I don't know how far he traveled to make it back to the house, but he curled up in the cat bed in front of the fire and passed out. I stroked his flank and prayed he'd live through the night.

I knew then he was our cat. That this really was his home.

The next morning, the receptionist at the vet's asked for his name. For the first time, I had an answer.

"His name is Buddy."


Update: Buddy is well on the mend, now only favoring his paw when he wants an extra helping of wet food or a warm lap made available. That's right-- he's gone from spooking at every movement to deciding that laps are great places to sit!
Posted by Steve Malley at 2:35 PM 9 comments: 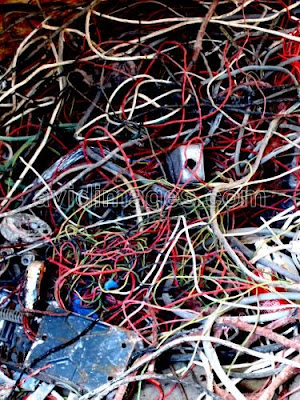 After a week without the net, I have finally convinced the 'technicians' that no, turning off the modem and turning it back on will not fix the problem and that, yes, the fault is in fact at their end of spaghetti wires.

Meantime, I have resorted to piracy, plundering an unsecured network that turns itself on and off at (to me) random. Dicey, at best.

The 'technicians' tell me my slick and lovely home wireless will be back up and running by tomorrow. Of course, they've been saying this all week...

Can't wait to get back to checking up on blogs.
Posted by Steve Malley at 6:17 PM 4 comments: