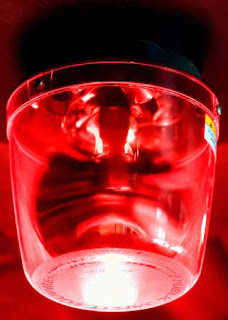 Now, all I have to worry about is earthquakes and, er, volcanoes?!
Posted by Steve Malley at 12:39 PM 7 comments:

My problem is, this sprawling saga of the Old West sprawls entirely too much, with an utterly horrible lack of resolution. The cattle drive that forms (or seems to form- it's hard to tell with this book) the main narrative thrust is really more of a backdrop for a large cast to pursue their character arcs-- sort of.

For all the horses and cattle and gunfire, the battles with outlaws, rustlers and the occasional indian, nothing much really happens. Maybe it was just that literary fashion in the 70's and early 80's to deny the reader a satisfying ending (Styron, Michener, I'm looking at you!), but I felt like I was reading To the Lighthouse: Western Version.

Really, I gave this book three stars because the language is beautiful, the action scenes exciting. Overall, I'm mad because McMurtry's other work led me to hope for more from the story.

For people wandering pointlessly in and out of each other's lives, breaking each other's hearts and betraying their own dreams, their deaths every bit as shabby and pointless as the lives they've led, for that I don't need a book. For that I've got real life.

View all my reviews
Posted by Steve Malley at 4:55 AM 4 comments: