That's right (in case you didn't guess from the headlines), I'm giving away one of my thrillers ABSOLUTELY FREE!

And don't worry if you like the feel of old-fashioned paper in your hands. There's no need to feel left out-- just take the PDF copy and print it out! 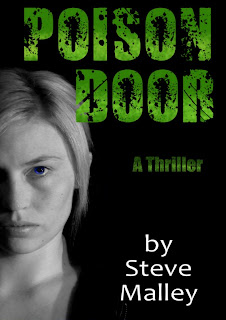 What's Poison Door about, you ask? In brief:

A fourteen year old girl caught in between.

When their lives meet, nobody wins...

Poison Door is exciting. I write suspense, and I write it well-- be ready to turn pages faster and faster right up to the end.

Poison Door is scary. This is a Noir thriller, a dark and violent story packed with action and laced with steamy sex.

Sarah Crane is one tough cop. In a country where police don't carry guns but criminals do, she has to rely on the strength of her wits and the skill of her bare hands. Faced with a series of brutal murders and the disappearance of young women no one else seems to miss, she'll stop at nothing to get to the truth. In troubled young Michelle, Sarah sees a reflection of her own dark past.

Tommy Knowles is a vicious killer. From a London orphanage to the shores of New Zealand, he has risen from life on the streets to control this small country's heroin trade. Now his own success has led him to the edge of disaster. To secure the weapons he needs in the fight for his life, Tommy will trade as many innocent lives as necessary to secure his survival.

Michelle Swanston is fourteen and in danger. Safer on the Christchurch city streets than she is in her own home, Michelle's night wanderings take her into a hell worse than any she ever imagined. With no way of knowing who she can trust, no one else she can rely on, this terrified young girl is determined not to go down without a fight...

There is one catch. I want you to review my book.

Poison Door goes live in two weeks, and I want to do everything I can to make it rise in the search rankings. Love it, hate it, all I ask is that you tell the world. Amazon reviews are great, same with other sites where fine ebooks are sold. Review it on Goodreads or Facebook or your blog-- anywhere the world at large is going to see it.

But all that's not for a couple of weeks yet. Right now, you send me an email (or even just leave your email in the comments) and I'll send you one heck of page-turner!

Gots me a widget! 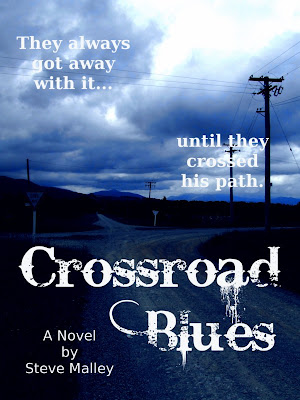 So, I recently re-read my ebook, Crossroad Blues. I wanted to see how it played out on Kindle, correct any formatting errors, etc. I did find a few (corrected now), which was good.

Thing is, I also found something more.

I started out reading with my editor's hat on. But as the book progressed, I found myself actually sucked in to my own work. It was a strange experience: on the one hand, I wrote the damn thing. On the other, I couldn't wait to see what happened next.

Not to pat myself on the back, but Crossroad Blues hums. I love the pace of it, the action, the murderous intensity of Maeve, the overwhelming arrogance of Jack Terraboone and the sheer creepy monstrosity that is Harlan Winters.

I read that book, and I hated the novel I'm working on. Right now I'm lurching from scene to scene. I can see revelations coming, but I have to write my way through where I am before I can get there. If where I am even leads me there at all. My current novel is nothing like the streamlined mayhem of Crossroad Blues.

And then I remembered:

At one point, Jack Terrabonne had a wife. She was the real genius, stifled by her husband's success and terrified of his fixer, Harlan.

At one point, Harlan Winters was a dapper little gray man, sharp and slick and looking to capitalize on his employer's indiscretions.

By the end of the book, things changed...

Jack's wife left. There were some great scenes between her and Harlan, real scary stuff. But as Harlan developed, I realized there was no way in hell he'd keep his hands off something he wanted. She shows up off-stage as a soon-to-be-ex, with a younger boyfriend, a hit album and a scandalous photo spread in (I think it was) Vanity Fair. It was the least I could do for a woman who suffered so much only to be written out.

As Kane revealed himself, I realized I was writing a Western. He's the classic cool-eyed stranger in town, a gunslinger who doesn't pack a gun. He was honest and decent and upright, a solid moral point in a wicked, wicked world.

That guy couldn't be in a love triangle. I lost scenes where he met Maeve and traveled with her for a time. Where he found himself disgusted by her wickedness (back then she wanted to hook a rich man, which is how she fell afoul of Jack) and was increasingly attracted to local girl Beth. I lost something like 30,000 words of that plotline.

And Harlan. What to say about Harlan...

He started out dapper and smooth. In those days, Jack's sexual appetites led to the death of the French girl and Harlan stepped in. He covered up the crime and began to extort Jack for his own purposes. There were some mighty nice scenes where the balance of power in that house shifted.

And I cut them all.

The Harlan who stepped up about halfway through the book was half based on a ruthless predator in my family, and half based on a family friend who used to babysit me-- a man now wanted for questioning in the rape and murder of one of his neighbors.

What I'm getting at is, Crossroad Blues came to be streamlined. It grew into something fast-paced and coherent.

This memory, this process, helped me. My current novel is nowhere near such a mess as that one was- and look how that turned out!
Posted by Steve Malley at 11:43 PM 5 comments:

Email ThisBlogThis!Share to TwitterShare to FacebookShare to Pinterest
Labels: a visit with a murdered darling, in which the artist is surprised by his own creation, the writing process

Angie said in the comments that she'd heard of escrima/kali but hadn't seen it.

Turns out, she probably has:

It's all over the Bourne movies. (The jerks disabled embedding, so you actually have to, like, click on it.)