Charles wrote another of his thought-provoking posts today, this time about giving yourself the freedom to 'write ugly'.
This is possibly the single most important piece of advice for ANY creator.
They call them roughs for a reason, folks. To finish that all-important first draft (without which, there is nothing to edit), you have to give yourself the freedom to do whatever you need to. Outline, draw pictures, make it all up as you go along. Change characters' names in mid-chapter if you must. Write an extra scene with someone who's already died, then decide if they 'stay dead' or not. Write your chapters in the wrong order if that's the way the story comes to you, but please, write it.
Sounds easy. Hardest damn thing in the world, some days. There are a million individual head games that get in the way. Almost all of them add up to some variation of your Inner Critic sitting on your shoulder and trying to edit the work-in-progress.
For me, the hardest days usually come right after the best ones. You know the good days. The ones where the work just flows, the words come steadily and they're even good. I have a day or two like that, and my inner critic starts in with, "You did such a nice job yesterday. Why can't you write like that now?" and variations thereof. One minute I'm tapping slowly along, the next it's an hour later and I'm still debating comma placement in a single sentence.
That critic needs a short, short leash. With a choke chain.
But there's a reason this entry is called Balance. The critic is important. The critic keeps us from serving up the dog's breakfast and calling it a feast. Release your inner critic on that first draft and let the blood and hair fly. Pat your critic on the head when it trots back with blood dripping from its muzzle. Your second (and subsequent) drafts will thank you.
Here's a visual example, from a tattoo I did a while back. Below is the first and second draft: 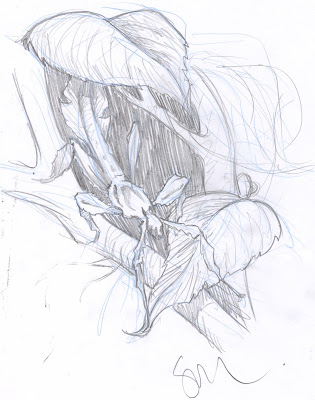 Those faint lines all over the show are my original blue pencil layouts. I just scribble them in, feeling around for size and mass and general shape. Look at how many weird things those leaves did and how the stick insect's body is one big blue cloud, I fiddled with it so much.

But those blue mistakes were necessary to the second draft: that dark pencil sketch. There, I (more or less) picked out one line. I gave the sketch light and shadow and general form. If this had been a story instead of a drawing, the characters would have the same name throughout at this stage. The plot would make sense, and any sense of symbol or theme I picked up in the first draft would be amplified. The main thing is, that early searching and flailing has now been simplified.

Of course, the finished tattoo was the actual 'final product', but the literary metaphor would break if we tried to stretch it that far...

If I'd let my critic off its chain too soon, I might have sat there with my pencil in one corner of the drawing, fussing and fretting over a bit of twig, or the veins in that one leaf. I'd probably *still* be fretting that leaf on the right, or that front leg on the left. The tattoo would never have been done, let alone the full sleeve it grew into.

It's all about balance. Charles uses a metaphor of personal appearance. Get too critical too soon, and you'll be the literary equivalent of Tammy Fay Baker sleeping in full makeup so not even her husband would see her true face. Go the other way, and you go the Kevin Federline route, showing up for important public occasions looking like you just rolled out of bed.

Email ThisBlogThis!Share to TwitterShare to FacebookShare to Pinterest
Labels: charles gramlich, day jobs, going overboard with blogger labels, in which the artist retreats once again into metaphor, the writing process, writing is like...

This is SUCH a good post and so timely for me. I want a DRAGONFLY TATTOO!!! Where does it hurt the least!
thanks for commenting on my blog!

I like your approach better than Charles' (sorry, Charles). I'm too obsessive to let a horrible sentence sit while I move on to better ones. My main issue is stopping myself from spending the entire morning on that sentence. And that's exactly where balance comes in. It'll be my goal for the next novel -- find balance.

Orion, the discomfort is part of getting a tattoo. Embrace it. Put the ink where it needs to go (where it'll look the best on you), not where you think it'll hurt the least. The pain goes away, the ink doesn't.

Steve, excellent expansion of this thought, especially the focus on "balance." The connection with the art piece, the tattoo, made it vivid.

And thanks for the great review you posted on "Swords of Talera" at Amazon. Much appreciated.

Great post. I was much struck by Charles's "write ugly," then came to your piece. Both address one of my own worst faults--that inability to let the words fall from my pen all awkward and ugly, and then just move on. It's exacerbated, I think, by computers. It may even be why I write so much faster up at the lake (or in an airport!). Fiddle too much and the handwritten page becomes unreadable. Then one simply MUST move on.

Ai Steve how I love to read your posts.....plus now I am even more than ever wanting my tattoo....just need to get someone to do my design(with all my crazynniss flaoting around it....hihih....so one rainy day I guess:)

Hi Orion, they all hurt. None too much.

Hey Avery, actually, I do try to let my 'horrible' sentences sit there. Often, you'll be surprised how hard it is to tell which ones supposedly sucked.

Charles, I just told the truth about Talera. It's one mighty fine book.

CS, I've been doing most of my work on the current novel longhand too. Sometimes, the toys to make life easier, well, don't.

And hey Etain! You or Avery or Orion ever make it as far as Christchurch, you can at least get a free tattoo out of the trip!

I'm gonna hold you to that ink offer, Steve. Let me know if you're ever in the Washington D.C. area. I'll give you the ten-cent tour.

Hello Everybody,
My name is Mrs Sharon Sim. I live in Singapore and i am a happy woman today? and i told my self that any lender that rescue my family from our poor situation, i will refer any person that is looking for loan to him, he gave me happiness to me and my family, i was in need of a loan of $250,000.00 to start my life all over as i am a single mother with 3 kids I met this honest and GOD fearing man loan lender that help me with a loan of $250,000.00 SG. Dollar, he is a GOD fearing man, if you are in need of loan and you will pay back the loan please contact him tell him that is Mrs Sharon, that refer you to him. contact Dr Purva Pius,via email:(urgentloan22@gmail.com) Thank you.