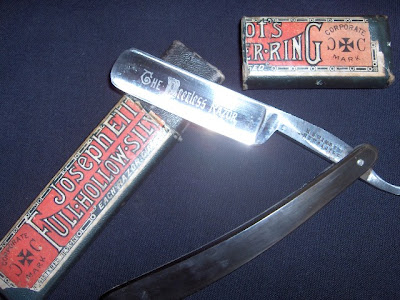 I am very much a willing victim of what William Gibson calls the Tamagotchi Gesture.

I shave with straight razors. That means honing and stropping (a lot of stropping), a cupful of lather applied with a brush, and a certain degree of care. And sure, a few bloody wounds in the learning. Shaving now takes me the best part of half an hour. It's as far removed as possible from the world of ten-to-a-bag, blue plastic disposables.

This is the very definition of the Tamagotchi Gesture: They're pointless yet needful, comforting precisely because they require tending.

Cut throat razors focus the mind. Zenfolk talk about being fully present, and nothing does that quite like having a big wedge of unimaginably sharp steel moving across your face. I come away from each shave centered and still, my soul the quiet eye of my usual cyclone of activity.

I think that's the heart of the Tamagotchi Effect. When too many things in one's life are instant and disposable, the overall effect is subtractive. By adding something that requires care and tending and concentration, we are nourished.

I'm writing my current novel longhand. And not just any longhand. After I ran Skatey the Skater Pen over with the car (yes, yes, I know!), I ended up switching to a dip pen. 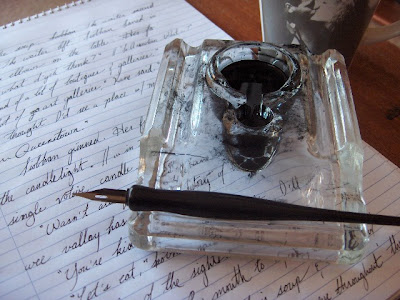 That's right. A. Dip. Pen. Write a couple words. Dip. Write some more. Dip. Keep that pressure light, or you'll spatter all over the place. At first, it required almost as much concentration to form words as to think up what those words should be. (as much thought to write as to write, as it were)

The odd thing: My output actually *increased*. Something about the concentration in making the words frees the part of my brain that's trying to listen to the story from distraction.

There's no point using a hundred year old steel quill (I have a thousand or so lying around) to write a novel. Ballpoints are cheaper, cleaner and way more convenient. And the laptop is right here. But for me, for this novel, this works.

PS Finished the Tin Roof Blowdown last night. I need to let it settle a bit before I throw in my two cents. Or ten, as that's our smallest coin in New Zealand. Or 6.8 cents, as that's what ten of our cents are worth in America....

Email ThisBlogThis!Share to TwitterShare to FacebookShare to Pinterest
Labels: tamagotchi gesture, the myth of leisure, the writing process, william gibson

Although I don't shave with a straight razor. Well, I don't really shave. I know what you're talking about with the sense of discipline and concentration that comes with doing a small task the old fashioned way, read hard way. I hadn't thought of it as Zen but it makes sense. We all need, or certainly could use, those moments of stillness and concentration. I have a few tasks that I do this way myself.

It's funny that the idea of writing in longhand (even with a ball point pen) could be thought of as old fashioned in any way, but I suppose it is. I have noticed that although I still write primarily on the laptop, I enjoy writing in longhand more and I think the physical act seems to have that effect you mentioned -- the writing experience is quite different. I'm starting to morph my process into one where first drafts are in longhand and then transcribed onto PC with the editing done on printed copies. I'm sure this experiment will probably continue indefinitely.

I get the same feeling making bread (without the bread machine that I usually use now),weeding the garden, and piecing quilts. Among my mother's ancestors (Pennsylvania Dutch), every action of the day had spiritual meaning. In my normal daily routine, where efficiency is the highest goal and I rush around to get everything on my do-lists done, it's not easy to find anything soul nourishing in daily activities. Thanks for the reminder to make space in life for the slow, focused effort.

I loved your post at Razored Zen about Book Abandonment Issues, which I also suffer from. I printed out your post to keep. I also have a Thing about magazines--I have to read every single article. You can guess how many magazines I have lying around.

I enjoyed your post a lot, as well as the responses from Charles, Lisa and Shauna. Coincidentally, lately I've found myself doing things in old-fashioned ways, using less technology but more hands-on effort--which usually requires more concentration. I did not know there was a word for this process. I will ponder the concepts. Zenlike.

wowi thats way kewl...a dip pen...I would hurt myself way bad with that razor...ones I nicked myself with a razor on my leg....hmmm...it was deep, I nearly lost my leg. I kid you not...I was in hospital for a week, the local shaving circus freak, the nurses loved to show ppl the girl who cannot shave...whahaha...
Anyways way kewl post:)

my entire first novel was written in longhand. i know writers who don't have writing programs on their computer because all they write stays on the internet. i don't know if this makes it opposite sides of the spectrum. but i must writer with a blue gel pen or my writing cannot be up to par. blue gel, medium point, my birthday is this coming sunday, thanks ahead of time, steve.

of course, i also need to spell-check, too. what lisa says i've always found to be true: longhand is first draft. when i write longhand each sentence is like a brick in the foundation. when i type what i wrote, i find the holes in the walls. i'll bet charles agrees with me on this. oh, and there is no need for me to have a razor, my avatar is, well, a, um, bald-faced lie, a photo from 1982 when i had that perry king look going...

Great concept. I'm going to have to ponder this. But it needs a different name. I still have nightmares about babysitting my kids' "pets" while they were at school. I always let the damn things die, and then of course we had tears.

Putting sharpened steel next to my jugular is about as good an idea for me as strapping two pieces of slick fiberglass to my feet and pointing myself downhill. Only bad things can come of it.

I wish I could write longhand. I even have a fountain pen. I love the way it scritches across the paper when I write. But, even my notes at this point are wholly illegible. A friend borrowed my note pad yesterday and wondered if the writing on it had been done by visiting aliens.

I like your description of shaving with a straight razor as Zen-like. Usually shaving is pretty boring, but with the whole slice 'n' dice element I can see how it would develop the powers of concentration. I'd like to try it. I'm in Christchurch too and just wondering where you got your razor and strop from. Did you learn/teach yourself?

It's steve_malley (at) paradise dot net dot nz, in case it doesn't show on my profile.

I picked up a straight razor in the Philippines, I think it was made in China. Unfortunately the one I got had a knick in it, which cut up the strop bad, and although I tried shaving with it, I never attempted the throat. Noisy things.

I have just written a blog on dip pens which I inherited from my mother. I have had fun with them, and now the kids are starting to use them.
http://kiwicranappleblend.blogspot.com/2008/09/judy-annes-speedball-dip-pens.html