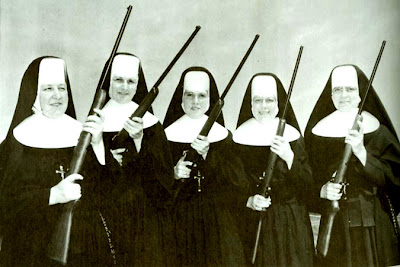 When I started doing comics, one of the hardest things for me to bend my head around was the necessity of stereotypes. But the sad truth is, they *are* necessary.

In real life, the deadly Mossad assassin probably looks like a plumber. The best martial artists are often either thick, rubbery and potbellied or downright emaciated. And your friendly neighborhood tattooist may be a fan of opera who speaks five languages.

Too bad. In the modern campfire tales we tell in print, a certain amount of stereotyping aids believability. If I bring Mossad assassins into a comics panel, they'd better look like Carrie Anne Moss in The Matrix or I'd better have a damn good reason. Same if my martial arts master doesn't carry at least a whiff of Bruce Lee or Jet Li, or better still, a frail little old man who just sort of smiles when threatened.

If I'm telling a drama, my hero needs to look heroic, or readers won't buy it. In comedy, I can send a Woody Allen lookalike charging through that door, but not drama.

Novels are not as bad as comics that way. Mostly because in prose the reader makes his own mental picture. The novelist does have more flexibility, but only some. We still don't want Jack Reacher short and tubby with a bald spot, Scarlett O'Hara with a lazy eye and halitosis, Conan with bad teeth or the creepy inbred inhabitants of Dunwhich to host an annual festival to boost tourism.

Stereotypes enable a quick scan. They're sensory filters, a part of our hunter/gatherer instincts, a general-classification thing that's hardwired into our brains. It was useful when our lives were all about edible/inedible, predator/prey, safety/danger. In the same way our ancient ancestors didn't carefully examine every single blackberry on each and every bush before eating, we modern types use that general-classification thing to navigate a bewildering variety of social encounters. Intimacy takes time, it takes interest, it requires the sort of deeper exchange that really pisses off everyone waiting behind you at the drive-thru window.

Same as intimacy takes time in real life, it takes time in a story. Same as it's not always appropriate in real life (they still won't let me back to that Burger King), it's not worth getting to know each and every character in your novel. So the big question, the one should be hanging in front of every writer's mind is, is it worth getting to know this character? How deeply?

Your first-person protagonist can be a tangled nest of contradictions. Most of us are. We understand this about ourselves, and we'll understand these contradictions in the person we spend 300 pages with. The supporting cast too. Less so, in the same way that we understand our friends. They don't tell us everything (any more than we share our every dark secret with them), but enough. The kid at the drive-thru? Probably best to let it go at a mention of his paper hat and his acne, if you need to mention him at all.

And that, really, is the heart of the matter. It's a choice, always a choice. And it's a choice that needs to be intelligently made. In Pulp Fiction, Quentin Tarantino brilliantly shattered the hitman stereotype as Vince and Jules make small talk right up to 'We ought to have shotguns.' But just as brilliantly, he leaves Marsellus, Lance, Fabienne and The Wolf pretty much as we find them. Crime boss, dealer, girlfriend, fixer. Expanding them further would have killed the narrative flow.

Next post, I just may well argue the opposite position. You see, it too is true...
Posted by Steve Malley at 1:52 PM

I find it very interesting how important it is to use the stereotyping in fictions and story-telling. Yes, it is a categorizing and labeling that mostly has a bad outcome in our every-day living, of today. Bit, very much absolute needed as a survival tool in ancient times.

We say we get a clear idea of the characters without overdoing in writing stories. Saying that, I ponder over if this ever can be universal. Do we share the stereotyping between the cultures? Or, is this a problem when fiction goes on the international market?

Anna-lys has me thinking... do we?

I agree absolutely. You have to be careful when and where you break stereotypes. It needs to be done at times, especially for main characters, but it requires a delicate touch.

I suspect the trick is in handling stereotypes well--using the brain's ability to fill in the blanks based on a few brush strokes provided by the author, but adding a little twist, a telling unexpected detail, that makes the character seem real, even though they're not.

Nice post. I see your point about stereotypes in a visual medium. After all, we see that in film and tv all the time also. And I like that novels at least can break out of the stereotype. I guess a certain small amount of stereotyping is inevitable and not necessarily a bad thing.

I can see where subtle bending of a stereotype character is a tricky piece of writing, when most readers expect to see them in any particular genre. To act out of character could be a death sentence, not only for the character but the author's book.

That's an interesting point. Maybe a contradiction even in any stereotype is good though, if there's room in an action-packed narrative like a comic.

The assassin in the novel The Day After Tomorrow is interesting, a stereotypical henchman in some ways, he's so devoted to his line of work that he's had his legs amputated so that he can operating with artificial limbs that let him appear at different heights to aid disguises.

I prefer to think of sterotypes as character archetypes who have been necessary to drive plot since the dawn of storytelling. Propp's work on this is interesting and definitely worth considering. Stereotypes are not bad things - they give readers a fast way in to a text, a point of familiarity and recognition and a sense of comfort - none of which should be underestimated!

I would love for your blog to be a part of blog4reel.com – the world’s first blog-to-film competition. It’s free! All u do is link this blog to blog4reel.com for a chance to win 2,000!

wow...this is a very interesting commentary. I am not trying to think of instances where the creation of characters outside of the stereotypes...works.

I guess stereotypes develop for a reason and we shouldn't forget it.

Hope you're over your move. We moved exactly a year ago this week and we still can't believe a year has already passed. I still don't want to move ever again. What a pain!

I liked Vince & Jules' discussion about the "Big Mac" in French. That movie was great.

I still struggle with the need to use stereotypes. I'd rather write fresh, original characters, but have found people tend either not to like them or not to understand them.

Thank You,but now I can't find Your profile and the right blog :-(