It came. I saw. It conquered. 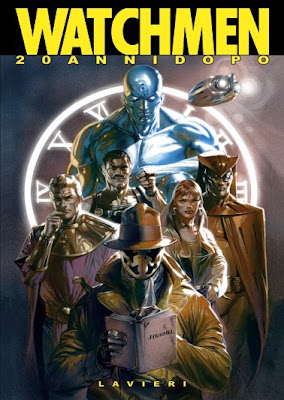 If you take nothing else away from this post, take this: see the movie. See it in the theater, where the screen is enormous and the sound system rattles the seats. Leave the kids at home. This is one superhero movie that is *sooooooo* not for them. It's a movie for those who felt The Wire was too uplifting on the subject of urban blight, and that The Shield was too soft about police corruption.

This isn't a review. I've loved this story for over twenty years, and I loved its translation to the screen. Fucking gorgeous. Go see the damn movie. That's my review.

1) The new ending was pretty damn brilliant. Translating this MASSIVE, structurally complicated story to screen was no easy feat. Even at three hours long, certain cuts needed to be made. For me, they worked. Though they did change the essential theme of the story, at least as I saw it they did.

Watchmen the graphic novel featured a story-within-a-story, a pirate/horror tale as savage and chilling as anything I've ever read. The ending of that tale, along with the original ending of the main storyline and the extra coverage and depth given to the anti-superhero riots, reinforced a strong moral theme that mankind is its own enemy, and its own savior. Our fate has always been in our own hands. 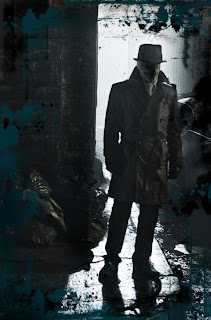 The movie's ending was more elegant, and quite frankly better done. It also left me with a distinctly different impression, much more difficult to express. To be honest, I need to see it again...

2) The world has changed. The movie did a beautiful job of evoking that nuclear terror that haunted the 80's. Annihilation was never more than moments away for all of us back then, and it was interesting to think about how much the world has changed since. Disaster threatens closer, but it's also a more intimate thing: two office buildings is a far cry from the entire surface of the Earth rendered into molten glass....


3) And it turns out I've changed too. Back in the day, Rorschach was my man. My determination to make a career as an artist was every bit as cold and ruthless as that trenchcoated psycho's refusal to compromise, even in the face of Armageddon.

Revisiting the material, I was surprised to find myself identifying with Dr Manhattan. Something about the blue guy's bafflement, the way that despite all his considerable power he just didn't get it, resonated with me. Maybe the Rorschach-like intensity of my youth led me to focus on art and miss out on people. Or maybe it was just the day I was having. 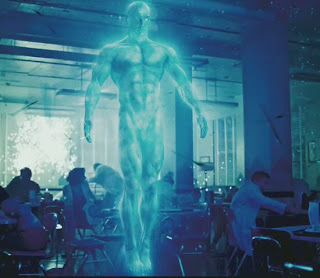 I know... It was appearance. Glowing blue and bald aside, that guy was just a few sit-ups shy of my own Full Throttle Physique! ;-p
Posted by Steve Malley at 10:26 PM

Email ThisBlogThis!Share to TwitterShare to FacebookShare to Pinterest
Labels: alan moore, the ridiculous idea that my abs look anything like that..., watchmen

I was in two minds about seeing this - was going to send DH off on his own but now I won't :-)

I thought it was great too, one of those movies to go and settle in for and get drawn into the world and it's narrative. Definitely worth the length. I read, I think in Entertainment Weekly, that there's a longer version for DVD. Also, the pirate story, I believe, is going to get its own telling in a DVD that will also bring Nite Owl I's "book" to life as a "documentary."

ohh, a new ending. That is intriguing. Loved teh novel. I will definitely see this.

Sidney, that'd be SO cool!!

Charles, you. Must. See it!

The trailers looked so cool I bought the graphic novel. But it sounds as if I should see the movie too.

I'd never even heard of Watchmen, but it definitely looks like it's worth a go. Thanks for your review. Sounds like something we should try to see in IMAX.