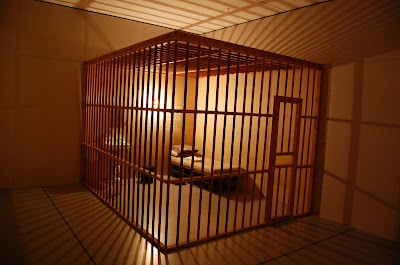 Charles posted on writers who destroyed themselves when they felt their best work was behind them. The examples he used were vivid: Hemingway, Howard and London, two suicides and one who drank himself to death.

Truth is, Charles barely skimmed the surface, but he did make his point. Writers struggle with the idea that they've 'lost it'.

Reading his post, it occured to me that I might have a useful perspective on this. You see, I've lost it a few times in life. Sometimes lost and found it again. Others, just, well... lost.

Comics: I haven't drawn a comic in some years now. My last original work was two parts of a trilogy that still sits unfinished. I never meant to stop, it just sort of worked out that way. The stories that have come since then have been novels, or sometimes paintings, but no comics.

Painting: While I'm on the subject, I was a keen painter in my twenties (back when paint was a newfangled invention) but I somehow managed to go the best part of a decade without picking up a brush. Those rare occasions I did try to paint, the work simply wasn't up to scratch. I made up my mind that those particular guns had been hung up.

Then one day a couple-odd Christmases ago, paintings were requested as gifts. I dutifully strapped on my brushes and made a big old mess out of some canvases. The work lacked my old magic (whatever that was), but it was too late: I was once again in love.

I got back to painting. The magic wasn't there, but the love was back. Then Frank Frazetta's Painting With Fire gave me permission to paint like my new self, if that makes any sense. New magic came. Last year I did my best to date. This year, well... it remains to be seen.

Tattooing: I've also certainly had fallow periods in my tattooing. Times when the work I turned out was... uninspired. When I'd look at the next tattoo and think I just couldn't be bothered.

Couple of those times I took a sabbatical, lived off my savings, took in illustration work, whatever. The most recent one, I couldn't afford to quit. So I just kept on keeping on. One day, I found inspiration again, this time in the work of Guy Aitchison, Kat Von D and Nikko Hurtado. I remembered why I picked up the needles in the first place. My focus shifted. The magic returned.

Personally, I think plateaus are natural. Exercising and learning, the curve tends to be periods of sharp, upward development and long, flat stretches where what really counts is the will to continue. No reason to think that things should be any different for creative skills.

Who says we have to be fresh, always doing our best?

And who says we can't?

Any writer who worries that they've 'lost it' should look to Johnny Cash for inspiration. Johnny came out of the gate with a bang: the first few years of his career, he wrote Walk the Line, Cry Cry Cry, Folsom Prison Blues and most of his classics. It was an unbelievable streak of creative brilliance.

Thirty-odd years later, he was still playing those same songs. He'd had a few bright spots creativity-wise (as opposed to commercially), but by the late 80's he was well and truly in the has-been category.

He was sure his best days were behind him. He even thought he'd quit recording, spend his time doing live concerts performing the music from his glory days.

Enter Rick Rubin, and a different vision. Johnny stripped down to the absolute essentials: his guitar and his voice. American Recordings may or may not be the best work he ever did, but it sure as hell showed the world his best days were far from over.

Maybe for Johnny (as for me), it was permission to be himself. To be that old guy with all the hard miles on him, not trying to fit who he used to be or who the other singers around him were. I know for me, those times I 'found it' again were also times I realized I had to be me, not a knock-off, even of my own earlier self.

Maybe if Hemingway hadn't spent so much time trying to reiterate Fiesta and For Whom the Bell Tolls, he would have had more, and better, work than The Old Man and the Sea. And maybe he wouldn't have been so damned depressed that he got the electroshock that made him suicidal. 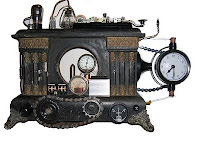 And yeah, the Steampunk Word-O-Meter stands at 12,800 words. I think it's the weekend (my busy time at work) that's the culprit, not the scenes themselves...
Posted by Steve Malley at 3:29 PM

Your comments about plateaus are very well taken. I've defintely found that in my own writing. I also find that when I take off some time from a creative endevour, like writing only nonfic for a while, it is hard to get flowing with fiction again.

I love your word verification this time. it's PIGNIC. Now if there isn't a word that should exist and be used for my picnics with Popeyes chicken

The alternation of times of improvement and times of plateau is so crystal clear when one is, for example, taking music lessons and yet so murky when one is writing. I think plateaus are best viewed as time the brain needs to absorb and consolidate new information and prepare to move to a new level rather than as a useless time of struggle.

I ditto on Shauna's comment. Plateaus are necessary to chew on what went before and if new tweaks are needed to progress. Sometimes writing something completely different is the catalyst a writer needs.

Charles, I suppose if I had a thesis (instead of a chain of rambling observations), it'd be that too many folks have called themselves has-beens when they were just getting ready for that next big jump.

And you've just made me crave Popeye's kitchen, like a match lit under my skin...

Shauna, I think these stages are always clear when we're looking from the outside in. Or back on our own development. At the time and in the moment, plateaus suck.

Barbara, it doesn't have to be writing something different: DH Lawrence and Henry Miller painted to rest up, Robert Heinlein drew cats and pretty girls (and fenced and did crazy math and spoke like a bazillion languages), and Stephen King is rumoured to play one mean guitar!

I'm not suicidal (yet!) but I do have to hold up my hand as one of those writers who thinks their best work is behind them. I think when we first start writing, we're full of fire and ideas and energy. Then we learn more, we become more analytical, we start worrying about markets and editors and sales meetings, and so we start second-guessing what we're doing. It becomes more calculated, less soul-driven, and something is lost. I was looking at one of my old romances a few weeks ago and I was like, Wow; I could really write in those days...

Very good post. I agree. Keep moving. Sometimes you have to drive off a plateau, but so it goes. Sometimes I think movement has stopped, that nothing new is going to come through then I get surprised.

Like you, I gave up art for 10 years & had sworn it off, only to go back & enjoy it all anew. That was the 2nd time I'd "quit." The 1st time was only for a year. I have to say, whenever I go back to art after such a period, I think my work improves. It may take some effort to get rolling again, but once I do, I'm pleasantly surprised at myself. I think that although I may chose to take a break from painting or drawing, my eye works on to improve my observation.
I've found there have been ups & downs throughout my interests, too. There's just SO MUCH to investigate & understand (if possible.) Wonderful, it is, to live in a world of so many possibilities...

Candy, this phenomenon is worthy of its own post, but rest assured, you write a damned AMAZING book now!

Sidney, you've hit the nail right on the head. And knowing that sudden sense of surprise and delight is waiting helps get me through those long, dark, frustrating times.

Lana, I think there's only so much (very little, really) we can do 'above ground' to develop as artists. The great majority of the work is done in vaulted chambers deep in our minds.