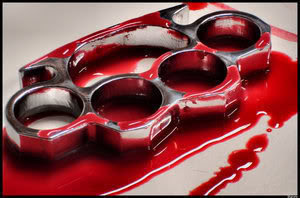 First, I want to thank Charles, over at Razored Zen. His decision to publish his short story collection Killing Trail for the Kindle format made a little light bulb go on over my head. Way I'm feeling lately, the natural thing to do was to smash the bulb and use the jagged shards to go for the jugular. :-)

You see, I've got four out-of-print graphic novels and four or maybe five novels that for one reason or another aren't quite right for my agent. Thanks to Charles, it occured to me that while the lovely and talented Agent Anne shops those novels that do suit her, I can be out there selling everything else.

A graphic novel about love and second chances, told against a backdrop of sex and gunfire


The plan right now is to roll them out on Kindle and Smashwords and maybe even that AmazonPOD thing I keep hearing about.

I like how Charles calls his publishing effort Razored Zen Press. Looking for a name to unite such a disparate body of work, the choice is obvious:

Bare Knuckle Press!
Posted by Steve Malley at 8:34 AM

Email ThisBlogThis!Share to TwitterShare to FacebookShare to Pinterest
Labels: bare knuckle publishing, god i've got a lot of work lying around here, in which the artist remains flippant in the face of his mounting work load

I really loved those graphic novels, man. I wouldn't give up totally on the mainstream publishing efforts but this might certainly be a way to get some of your stuff out there and start attracting a fan base.

I would love to read some of your work: the supernatural thriller and the one about zombies.

Though, in the end, you have to go with what compels, Steve.

Charles, I'm not giving up, I'm just overproductive. Anne knows what she likes and what she can sell, but I seem to tell all kinds of crazy stories. The djinn leads where it will...

Barbara, I will get to them. I seem to recall the zombie one needs a bit of a tidy-up, but I'll get them both out!

Steve, they sound terrific!Especially the supernatural, the zombies and the Knights Templar!

*squeals with glee* That's great news! I've been wanting to read your work.

Bernita, that Templar story is my cursed book: written and drawn in a one-room farmhouse with the tail-end of a failed relationship; solicited in the distributors' catalog for September 2001 (orders fell right off 11 days into the month) and perpetually stuck in the shadow of The DaVinci Code. I hope it finds a little peace and a few good readers now... :-)

That's a great idea -- go to it with gusto! And yes, salutes to Charles and Lana for leading the way!

Charles is inspiring. I've been toying with the idea myself, perhaps putting my first, long out-of-print romance up on Kindle. I was lucky to get the rights back shortly before my publisher started releasing the others as ebooks. It's irritating that under the old contracts (before anyone thought of ebooks) they can technically keep a book "in print" that way and thus hang onto the rights.

I've been wanting to read something of yours for a long time. I hope Bare Knuckles Press is up and running soon.