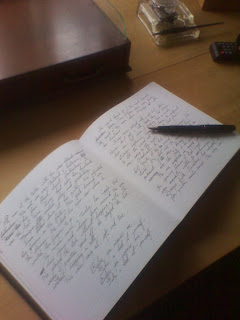 Well, for a change this blog has been quiet for a *good* reason: Kane's back, and just like last time, he's kicking ass in longhand!

I don't know what it is about that character (maybe that he's pretty old-fashioned and low-tech himself), but writing him goes quicker when I break out my trusty old fountain pen and a thick blank book.

Of course, that first draft is not all I'm up to. As usual, I keep my plate pretty full: I've got another short story about halfway done, a couple of workshops I'll be leading for New Zealand Book Month, a novel set in rural Georgia just getting its final touches before release and staying booked out about a month in advance for my tattoo work.

But every day I force a block of time to sit with Kane: It's two years after the end of Crossroad Blues, and he's been in Paris. He's got his own apartment, a regular gig at a small Blues club and some money in his pocket. An indie record label's showing some interest.

One night he sees a girl in a party dress go down a manhole and pull the cover shut behind her, and everything changes...
Posted by Steve Malley at 12:44 PM

Email ThisBlogThis!Share to TwitterShare to FacebookShare to Pinterest
Labels: in which the artist is surprised by his own creation, the sleeper shall awaken

I'm so glad to see you back. Looking forward to your new work.

Hey, it's great to hear from you again. :) I'm glad you've been busy, and with good things. Go-go-go on the writing!

That sounds awesome! (c: I'm glad that you're getting the chance to reunite with Kane! Keep it up!