Writing, a Tale told in Allegory

39,400 words (with good reason)
Today was the Tiny Dynamo's birthday. By ancient and venerable tradition, she got to pick the Honored Activity.

Being both Tiny, and Dynamic, she chose to haul our asses up the side of a damn mountain.

I'm not out of shape (certainly not for someone who remembers steam-powered zeppelins), but when my most recent brithday rolled around, my choice of Honored Activity involved a well-made coffee and a big slab of cheesecake. A visit to a bookstore followed.

There were inducements. At the top of the ridge sat a volcanic-stone camping shelter abandoned in the 1920's and only recently renovated. It sits in a desolate place, and no roads reach it.

Damn it, I wanted to see that hut.
It started out sweet and lovely. A pleasant lark on a summer's day. We passed over sunlit pastures and sparkling streams. It was a little bit uphill, but then, I knew it would be a climb, right?

Then the climb began in earnest. The land slanted up, and further up. The wind stopped, and the sun beat down on the land. Everywhere I stepped, I hit sheep shit.
I slogged on.

Here and there we came across a tree. Those lovely bits of shade, those chances to look out over what I'd done kept me going. Sometimes, the view up the trail ahead made me despair.

A couple times, I gave serious thought to giving up. Just turn and go back down. But, one does not draw so beguiling and wondrous a creature as the Tiny Dynamo to one's side by being faint-hearted, cowardly, or giving anything less than one's best. Giving up simply was not an option.

And just when I was thoroughly shattered and wondering if I really could walk until I collapsed (again), a roofline came into view. A surge of energy ran through me, and the pack I carried didn't seem so heavy. 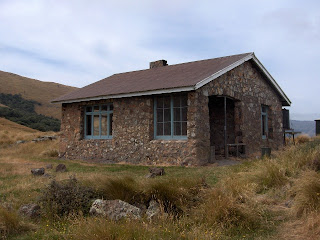 The surge to the end was quick. The view from the top was incredible. I was up in the clouds, on top of the world. 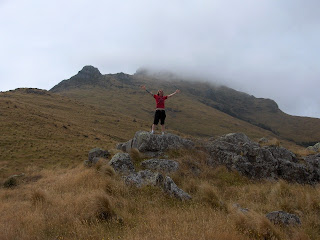 It was totally worth it. And on the trip back down, the walk up didn't seem like it'd been that bad. 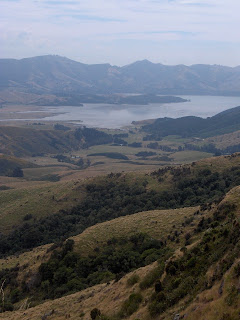 It struck me then. This was *so* like writing a novel.

Except now I can't quit thinking about the axe on the chain... 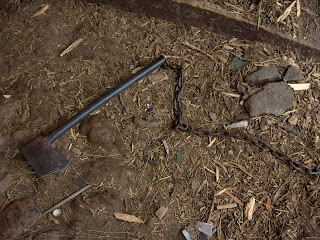 "The Axe on the chain." Now you've got me thinking about it.

Wow - great pictures, great birthday and great story. What WAS that axe on the chain. You just spawned a hundred more stories... :)