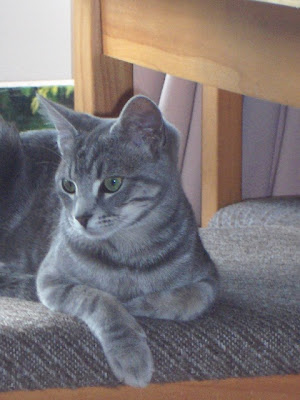 Butler is bigger.
So is my novel. As my tools have slowed down (still on the dip pen), my storytelling's speeded up. It's kind of fun writing this way, even if it is all a bit Still Life With Woodpecker. ALl the same, I hope it's just this one story.
At least the story's humming: 75,000 words, every one of them a struggle that made me feel like Jet Li's evil twin at the end of The One-- no matter how many of the bastards I beat, there's an endless swarm still coming.
That feeling's eased off a fair bit now. The characters are clear about their actions and not shy about letting me know what they are. The bad guys have been a long time in an increasingly untenable situation, and their whole dirty house of lies is about to come crashing down on them.
Oddly, I have no idea how much longer this story will go. On the one hand, I may find out that the first fifty thousand was just back-story and warm-up. On the other, my end may be closer in sight than I realize!
One thing I do know: I remain surprised. Part of it is supporting players retreating from the scenes or coming to the fore. After all, *they* don't know they're supporting; they think they're the stars and have to act accordingly. Part of it is a still-growing understanding of my leads and their own agendas.
But a lot of the surprise comes from my hero in this one. He's smart and tough, but also honest and direct. In fact, he's probably the only honest and direct person in this whole ball of wax.
When I started this story, I had in mind that a lot of his troubles would come from the deceits and manipulations of others. Instead, that direct approach to problems has been a real conflict-engine.
Last night, he went up to the viper's nest and knocked on the front door. He wants to see for himself if there's any truth to the rumors.
I can't wait to see what happens...
Posted by Steve Malley at 2:32 PM

Butler is growing up to be a handsome cat.

I don't know if I'd have the courage to write an entire novel this way. But maybe a scene...

Glad you are making progress. And that things are still surprising you. Isn't that so much of the fun of creating these fictions we do? Good point about the supporting characters believing they are the stars. I'm realizing lately that I haven't done enough of that in some of my tales. Something to work on.

What a fine figure of a feline. I'm starting to loosen up a lot more than I was a year or two ago, but I envy your ability to just let it flow...

It's a good feeling when everything starts to come together like that, isn't it? I've yet to hit any sort of pace, or even comfort zone, with this next novel, so I'm seething with jealousy as I write this.

Steve, you inspire me. I can't believe you're that far along already. Congratulations.

And Butler is a beautiful beast.