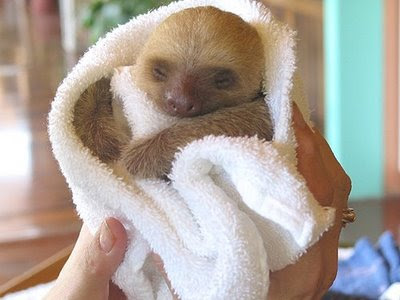 Bernita wrote a fine post on the sigh. I figure it applies to smiles, frowns, raised eyebrows and hands on hips as well.
Especially smiles. How many scenes have you read where the characters smile at each other, like, every other sentence? Think about it. The only people who smile that much in *real* life usually want to talk to you about Jesus. Or get ou to drink the Kool Aid.
Lazy writing is all it is. But only middle-of-the-road lazy. The writer is trying to get you into the character's emotional state, so yay. And there *are* worse ways to do it. But there are better: much, much better.
So here, for the record, is Steve's Heirarchy of Sloth:

1. I'm Telling: This one's the King of Flab. Feel lazy enough to lie in your writing and make trash angels? Just give us your characters' emotional states in so many words. Watch what could be an exciting moment lie flaccid at your feet:

"I don't love you any more," Tom said. It pained him to say it.
His words broke Emily's heart.

2. The Swiftie: Anybody else love those Tom Swift adventures when you were kids? I did. Then I turned eight or nine, and using an adverb to 'tag' the emotion onto dialogue became unnacceptable.

"I don't love you any more," Tom said sadly.

If you want to be aggressively stupid, have the dialogue and adverb amplify each other: "I'm going to kill her," he said menacingly. Do. Not. Do. This.

3. Smile, Sigh, Frown: We've made a big jump here, up to the level of the barely acceptable. You're letting the reader fill in the *tiniest* of gaps, enough to know that happy peoplle smile, unfulfilled ones sigh and those who disagree or disapprove frown.

Tom frowned. "I don't love you any more."
"I was afraid of that," Emily sighed.

I'm reminded of men 'letting' women use their tools. The impulse to stick a hand in there and take over is only *barely* restrained...

4. Use the Environment: Completely acceptable, and readers even like it.

Tom stared at the patterns on the rain-streaked window. The room was cold away from the dying fire.

Readers are smart cookies. They're easily capable of making that jump between the rainy day, the cold room, and Tom's feelings for Emily. No stick-beating required. And if you can do three or four hundred pages of this with nothing really happening, literary prizes and fellowships may fall at your feet!

5. Striptease: Ever ask a question and get a question for an answer? Were you ever have so much at stake about an answer that you couldn't bring yourself to ask the question outright?

Revealing our feelings is often a gradual, I'll-show-you-mine-if-you-show-me-yours striptease. There's no reason for your characters not to do the same.

"It's been awhile," Emily said.

The waiter set their coffees in front of them. The cups were tiny, the porcelain almost unbearably fragile.

"Not that long." Tom sipped at his coffee and made a face. Emily stirred hers without drinking.

"You ever, you know, think about it?"

"Sometimes." Tom drained the rest of his coffee. The taste was black and bitter.

"Yeah, me too. Sometimes." Emily stood up, her untouched coffee splashing on the table. "Well, it's been nice, but I've got to run. Things to do, you know..."

In good fiction, as in real life, wearing our emotions openly is an invitation to get them stepped on. And yeah, I used a little cheat: Tom 'made a face', but it's a small cheat, and their exchange holds up without it. In fact, you may notice that the coffee is mostly there for 'stage business'-- it helps me control the beats and pauses in this uncomfortable conversation. But the 'stage business' does some extra work, too. The fragile cups, Tom's black and bitter coffee, Emily's refusal to drink, all have a little something to say about their relationship.

6. Deny, Deny, Deny: Rare air up here. This can be unbelievably effective, or it can fall on its ass. And it all depends on your reader, how much attention they're paying and what kind of sophistication they're bringing to your work.

You've got these POWERFUL emotions running, but you leave them completely under the surface. It's up to the reader to winnow them out. Think of the movie Goodfellahs, where Robert DeNiro waits until a fellow hood leaves, then asks the guy next to him, "You think he talks to his wife?" Without another word, nobody's a bit surprised when the guy and his wife show up dead.

Tom and Emily lay together. The tangled sheets smelled sour, and cold shadows from the rain-streaked window crawled across their bare skin.

Emily stroked Tom's hair. He stood up and began to dress. She bit her lip and said nothing.

Notice I fell back on my #4 crutch there, the sheets and their skin. Nobody says you can't, and I rather like that image, but the point is, I could take it right out of there and still be left with a sparse, bare, lean passage that works.

At least, it works *if* you get Emily's touching Tom's hair as tenderness, and Tom's standing up and hiding under clothes as denial of that bond. Hemingway used this technique powerfully. Or if you didn't get it, it was a man and a woman on a stalled train, and nothing really happened...

So, to recap, Steve's Heirarchy of Sloth:

And just to be honest, I have bad-writing days, same as anyone. But you'd better believe that every time I catch a character smiling, sighing, frowning, putting hands on hips or, God forbid, saying something menacingly, I go in there with red-hot tongs. Some smiles, etc. *do* have good reason to remain, but very few survive my trial by fire.

Email ThisBlogThis!Share to TwitterShare to FacebookShare to Pinterest
Labels: bad characterization kills stories, craft, reasons many fail and their bleached bones pile high on either side of the path we tread, why showing is better than telling - an example, writing

Kate sighed and listened to the rain pattering gently against the window. She was sad that Steve's list had exposed so many of her transgressions. A small frown creased her brow as she wondered what to do.

Another wonderful post. And yes, I am guilty of some of these transgressions. Cigarettes make great props!

What a cute sloth. Just don't forget those claws.

Great post, with excellent prose illustrations of your points. I'm sure that I'm guilty of the "smile" thing on occassion. As you say, it's an effort at times to control the beats, but with more effort I could find a less simplistic and cliche way of doing it. Sometimes, of course, the sighs and smiles can be deliberatly used to create a character image, usually of one who is false, hiding behind a mask or being melodramatic.

This is one of the best, most succinct tutorials on dialogue that I've seen. It's funny because how and if to use #4 really does seem more a matter of style than anything. Some writers use this technique extensively and when spare description is used in the double duty fashion you've employed and it supports the mood, I like it a lot. I think it's somewhat related to #6, which I think of as subtext. Hemingway's short, short story, Hills Like White Elephants is a great example of subtext. Always tricky because it takes a big leap of faith to believe the readers will catch it. Fantastic post.

Loved the baby sloth picture, then cringed at having so many of my dialog flaws pointed out. This post is definitely a keeper. In fact, I think I'll tack it up above my computer. Thanks for putting so much thought into making a clear, thorough post.

I love sloths, they are the coolest creatures.


Don't we all have bad writing days? O have them everyday. The key is to let them slip into something better ... it just takes time. Good post Steve.

I'm a sighing
and a frowning...