A Quick Apology: I put the cart in front of the horse a bit yesterday. I didn't give enough space to the whole scene/sequel construction, instead diving right in to the how-to. I'll try to clear this up today... 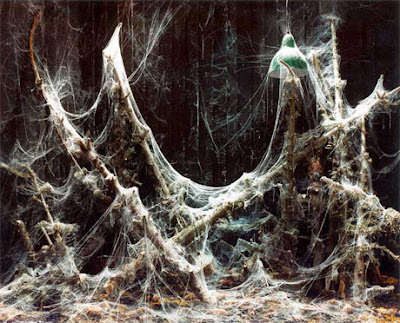 'Sequel' in this case doesn't mean the second book/movie/episode in the series. There's a particular way of looking at dramatic construction that says a scene is conflict, a sequel is the aftermath that sets up the next conflict/scene.
Example:
Polly needs to get to the hospital, a matter of life and death.
Scene: Polly drives to fast in her rush. The car spins out of control. Polly's struggles to stay on the road are conflict.
Because it's early days yet, she's unsuccessful and crashes!
Sequel: Polly is shaken by her brush with disaster. The car is now useless. She thinks of various ways she could get to the hospital.
Because the story isn't over, Polly's decision makes things worse: she decides to get in the van with that friendly man in the trenchcoat. Well, maybe not friendly exactly, but he does keep rubbing his hands together and smiling...

You can write a whole book this way: Dean Koontz's best thrillers follow this pattern relentlessly, and to great effect. His less successful efforts indulge a certain tendency to wander... James Lee Burke and John Connolly use the formula as well, but with a less compressed timeline...

I know a lot of writers consider sequel 'that squidgy bit in between', but treated properly, it's a powerful and multi-purpose tool. One major use is to get the reader sympathizing with the character.
*NOW* go back and read the bits about the four stages of experiencing a sequel. All right, we're back on track! :-)
Now, how you handle your sequels depends on the type of story you're writing.

Literary fiction tends to dwell *heavily* on sequel, often to the detriment of, you know, stuff happening. I recently read a literary novel where over the course of 500 pages, maybe three actual incidents occured. I knew the heck out of the protagonist, though I didn't much care... Next time you read a book that seems to bog down, look at how much time the author is giving to the protagonist's inner workings versus, you know, stuff happening.
Romance, sequels lean heavy on the emotional side. The storyteller there wants you really, *really* feeling the heroine's pain. Crime, on the other hand, tends to run to the thought side: we don't mind that Jack Reacher isn't too emotional about the stuff happening around him. It's part of his charm, and his major strength is his ability think about the evidence.
Suspense tales are heavy on decision. As those heroes and heroines find themselves under more and more pressure, we readers like to *see* the walls closing in. There's nothing better seeing a character make an awful choice but knowing that all the choices are bad. Do it right, and we step inside that dark room with the heroine, defenseless and alone. Do it wrong, and the reader shouts at the page, "Just fuckin' call the cops already!"
Action stories dwell lightly on sequel. Right now I'm reading Wings Over Talera, and the author treats sequel with a deft hand. Short passages in the center of chapters. They have to be in the middle, since every chapter ends in a cliffhanger, so the next chapter has to resolve that one, and so on. But even in the midst of all this rollicking great action, Ruenn is having understandable reactions and making understandable decisions. Which lead to something worse happening.
If the writer handled these crucial passages wrong, we might have a cardboard hero pursuing conflict for its own sake. Or a passive character bobbing like a cork from trouble to trouble - for an action hero, a fate worse than death!
My time's about up, so I'll get to using scene and sequel in your pacing tomorrow.
Posted by Steve Malley at 12:10 PM

Aha -- this helps to clarify my earlier confusion and this is something I don't think I've ever thought through before. I will now be paying much more attention. Thanks!

Thanks for this excellent series of writing posts. You have some great thoughts on the craft, and you convey your thoughts eloquently (and very readably).

Yes, a nice tight post. It's good to see the stuff on scene and sequel spelled out and with examples given. Seems too often I can only hold it in my head by thinking out an example.

Btw, any post that mentions that Gramlich fellow is a welcome one. He's sort of my hero, you know.