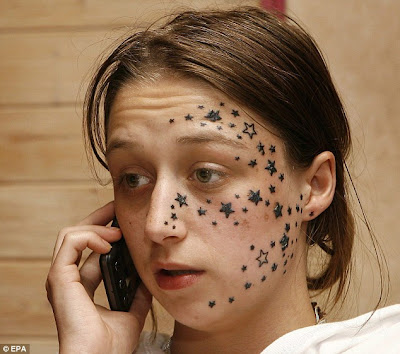 Fell asleep?! Are you *kidding* me? 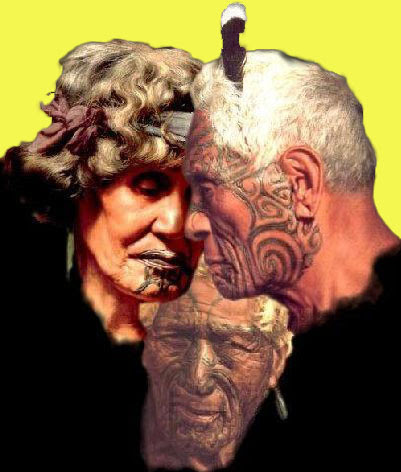 Now, I've never tattooed anyone's face, but I do live in the land of Moko, have talked with clients who've had cosmetic tattooing done and seen a couple of guys get their heads tattooed above the hairline. Those guys were pretty tough characters, and they were in absolute AGONY when the tattooist got near their temples. Cosmetic tattooing is usually done with topical anesthetic. Ta Moko was, among many other things, a way of showing you could take some serious pain.

Somehow, I doubt this young lady 'slept through' what looks like an hour or two worth of work. The forehead and brow ridge, maybe the cheek and jaw I could buy, but the soft tissue under the eye?! The side of her nose?! If she's got something that let her sleep through that, I'd love to have a little for when I get my ribs finished...

And hand-drawn or stenciled, you might think she'd have noticed the design kind of, you know, 'going large'. Unless she was supposed to have slept through that, too. Bloody ridiculous!

Kimberley Vlamink isn't actually the one making me mad here. Young kid had what probably seemed like a pretty good idea at the time, that turned out to be pretty f**king stupid at the end of the day. Fine, we've all been there. Instead of fronting up, she spun out a threadbare version of 'I didn't know; an older boy made me do it'. Didn't work for me when I was eight and me and my friends got caught with our first Playboy, but then I'm guessing Kimberley's dad is a hell of a lot more gullible than my mom.

I'm pretty disappointed in her dad, both for buying that fib and for trying to cash in on it (though 10,000GBP might just be what tattoo removal costs there, I don't know. I'm very damn disappointed in the ass-clown who did the work, but look at the photo. What can you expect.

Mostly, I'm steamed-up at the glee with which this story has run across the news. It was a top story on Google and Yahoo's news services, and a 'find out tonight' teaser on my local news. I assume it's popping up in your local markets too-- Never fall asleep in a tattoo parlour (our local newscaster's words) has all the stuff of urban legend. I've seen so much glee at the idea that a tattooist might run amok on a helpless victim that very few reporters seem the least bit interested in asking if it's even possible.

One way to do a little fact-checking: see if Kimberley manages to sleep through the laser treatments. And if she does, I'd love it if she'd share whatever she's on. You see, over the next few months I'm hoping to finish my ribs...
Posted by Steve Malley at 3:06 PM

Thank you, Steve, for posting this. I wondered when I saw the first news report as I had heard being tatooed could be painful.

Yeah, I saw that linked on another blog and just had to eyeroll, despite having no tattoos myself. I mean, seriously, she slept through it?? And the tattooist had so little care for his career, his bank account, or his legal freedom that he just kept going all by himself...? And her father buys this?? Wow. It makes me wonder what else she's gotten away with in her life.

Shaking head here. Hadn't seen this one. It boggles the mind.
lx

Finish your ribs? I thought those were supposed to be completed around birth.

One wonders how these people survive childhood. I suppose it's possible she deliberately took something that knocked her out, or that had her flying so high she was oblivious to what was going on. That guy looks like someone I wouldn't trust near me, let alone near my face. Seriously scary dude.

I don't believe this for a second. There's no way she could have slept through that unless she was in a coma.

I feel better. This is way worse than letting your tattoo be put on reversed. If I were her, I'd leave the stars . . . they have to look better than the scars will.

Barbara, some spots more than others...

Angie, oddly enough, it looks like this was the best thing for the tattooist's career. His little hole-in-the-wall shop is being featured all over the world, in an age where even bad attention is good.

Liz, I'll join in on that head-shaking!

Charles, some people's ribs, maybe, but there seems to have been an oversight in my case: mine came *without* the pictures! lol

CS, guys like that wander in to my place sometimes, looking for work. They never seem to see why the answer is 'no'.

ha!the truth is finally revealed. she admits she lied, & did in fact ask for 56 stars, foolish girl.

Holly, I must admit when I heard that I chortled in my glee...

um yea i know, you were sitting next to me at the time. lol :)

The truth is out now but yeah, man up for crissakes. Personally I thought it looked good. Who cares if daddy'll be mad? At least grow a backbone.