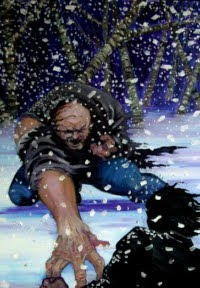 All over the web, every writer's blog seems at some point or other to carry that plaintive wail, "How could they give my book that cover??"
Well, as a part-time illustrator getting into self-publishing, I'm in a unique position. Over the next post or two, I'll take you through the process of coming up with what I hope is a grabbing book cover.

First, I like to think I've got the best possible author/art dept. relationship: we are the same person, after all. No way writer-me was going to find a more sympathetic and conscientious cover artist, or one with a more vested interest in the title in question doing well... ;-)

That doesn't mean it was a trouble-free relationship. You see, writer-me spent a lot of time and effort honing that story until each and every one of its 80-odd thousand words serves a purpose. As far as the writer in me is concerned, that story is as lean as I can make it.

The artist gets one image. One. Out of every scene in the book, I only get one picture, one chance to draw you in, to turn a browser into a reader. (With any luck, the story itself will turn the reader into a fan, but that's another story.)

Now, I'm overworked, but not as overworked as the average publishing house's art department. And like I said before, I have that vested interest. Still, I treated it like any other illustration job: I broke out pencil and watercolor and started with a couple pages of thumbnails, maybe a dozen or so all told. Quite a few were, frankly, crap. It didn't matter-- this was brainstorming time, and crap still gets a seat at the table.

Second, I tacked up my thumbnails and had a look. The reasoning is, once our covers are out in the world, we have very little control over how they are displayed. A concept that's eyecatching at three inches tall from across the room just might stand a chance when it's elbowing for attention among its peers.
Tacked up like that, I could see my two strongest concepts at a glance. One was from the climactic final fight, Harlan and Kane fighting for their lives in a snow-covered forest. The other felt like a betrayal of my writer-self: Kane standing at a desolate crossroads, the Otago plains before him stretching out into the Southern Alps. There's no such scene in the book, but artist-me felt the image caught the essence of the book's hero.

The writer in me railed a bit, but there's no denying a good image. And it's certainly not like the art department was just trying to fob me off or anything-- I knew my illustrator was taking this seriously. 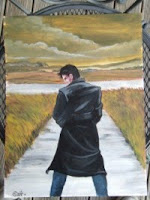 (Starting to wonder about my multiple job-personalities? You ought to be in the room when they start arguing! lol)

So, a little painting later, I had two images. Both are composed to lead the eye in certain directions. Both have a fair amount of 'dead' space to accomodate titles, etc. I liked the strong diagonals in the snowscape and Harlan's murderous insanity. The crossroad picture is calmer in composition-- the idea here was to use the 'crossroad' as 'crosshairs' to center the eye on Kane. His strong black presence in all that bleak autumn space hopefully convey the hero's poised and quiet menace. The way Jack Schaefer describes Shane as 'like a steel trap about to spring'. 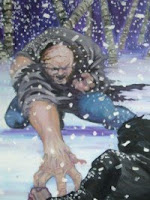 The paintings were too big to scan (working larger makes for a sharper image when reduced), so I shot them at 5mg with a digital SLR I picked up cheap and used. I made sure to take the photos outside and in the shade, to prevent flashburn, glare, etc. The unretouched photos are just over there on your right.

Next, I opened them images up in GIMP (a free-download graphics program, kind of like a poor man's Photoshop). I used the color toolbar to adjust the levels, deepening and brightening and making the image just overall richer. The title font is a freeware TTF that really does the trick nicely, and I played a fair bit with font colors before I was happy.

(Note: If any of you want to try this yourself, use 'Save As' to make a separate copy of each major stage. You'll thank yourself when you screw up or want to change something.)

After that, it was up for the vote. Those of you on my Facebook art page saw the four variant covers. Over the course of a weekend, I got votes and comments from almost a hundred people. It wasn't long before there was a clear winner. A few helpful suggestions taken on board, and... 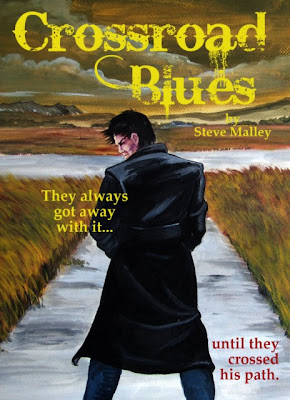 Email ThisBlogThis!Share to TwitterShare to FacebookShare to Pinterest
Labels: bare knuckle publishing, covers, on the idea that wearing many hats may have driven me fundamentally insane

Great title too. I enjoyed taking the reins for all aspects of the design and formatting for Killing Trail too.

Nice cover. I'm trying to avoid that route, myself. I used to do more commission-based work, work for others. Now I don't want to have to fit in someone else's box (& of course, I don't have a book of my own to cover!)

Great stuff! I think for the title, the one you chose is the best, but I have to say, that other one pulls me right in. I hope you use it for something else.

How lucky to have an "in" with your cover illustrator!

I like the way you manipulated the original artwork. But I think I actually like the dynamism other the other illustration better. Did you not want to hear that?

Thanks for the kind words everyone. I really liked the snowy one too, but the people voted...

Liked it.
But would like to see your name in bigger font.