I write with a tight cast. I'm facinated by personalities driven into conflict with each other. When it works, hero and villain crash into each other at the end of an inevitable and ever-accelerating rocket-slide into their own personal hells.
I find myself driven to explore even the lowest-level henchman. Even if the information doesn't make it to the page, I need to know *why* they're on this adventure. Why don't the guards quit? Or call the cops or something? Why do those damn stormtroopers just stand in that hallway?
When one of my characters stays wooden on the page? The whole story lies dead.
Dead, dead, dead. Dead.
This becomes... upsetting.
For me, character is like grappling. Punching and kicking, the shot lands or it doesn't. That's like scene construction. The scene works, or it doesn't. Grappling is fluid: winner and loser can change in the blink of an eye, and everything's up in the air until a definitive hold locks on.
With Poison Door, my problem was my hero. Sarah Crane, my tough cop, notices runaways and street kids going missing. Pulling that thread unravels her life. I had a good grip on the villain and the street kid who acts as the bridge between the two, but Sarah, she just kind of showed up on time and said her lines, you know? No spark.
Two thirds of the way through the book, I was sweating bullets. Sarah was the damn hero, and she bored the hell out of me! One day, riding my bike in the city, I was humming a little tune in my head, One Hundred Punks Rule, by Generation X. Rolling past a couple of young'uns, plaid and piercings and colored mohawks, I had the usual whistful thought that my days in the mosh pit are behind me. 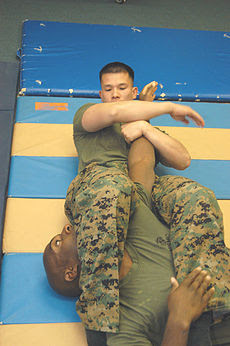 For one thing, I'm not as keen as I once was. And even if I *was*, there's nothing creepier than the really old guy at the kids' party.
BAM! The arm-bar shot home, and I had my grip on Sarah. I went back through her sequels and wrote from the heart about the invisible and irrevocable membrane that seperates us from our youthful selves. Bits of her character began to dovetail, and by the time I got back to the point I'd left off, she was barrelling forward on greased rails.

Now, with Crossroad Blues, my problem was Jack Terrabonne. Jack's my Minor Bastard, a vain and selfish man whose ego makes the Major Bastard's evil possible. Jack's a washed-up country music star, putting off his eventual sunset in Las Vegas or Branson, Missouri and pretending to the vigour of his lost youth, living in the glories of his past and blind to his evils in his present.

Problem was, Jack was a little bit cardboard. Part of my problem was that I'm in a very different place in my life, and on a very different trajectory. Part of it is that I simply do not like this asshole. If Jack wasn't so self-involved, a lot of lives might have been saved.
So how do I write him? Where's my hold?
Well, I start with two articles of faith: 1) My subconscious has a reason for putting him in the story. 2) This guy's dog thinks he's pretty cool. That is, somewhere in this guy's life, he gives and receives love and and acceptance.
So I've been grappling with Jack, jumping from hold to hold, trying to find one that locks on. I've written a bit about Jack's few genuine relationships, and a bit more about his efforts to revive his recording career.
But I still don't like him. Jack is isolated, deluded and monstrously selfish. He's....

Jack Terrabonne is the unbridled artistic ego. He's the natural result of Picasso's quote to the effect that 'an artist would rather see his kids on the street and his wife in a whorehouse than go without paints and brushes.' Jack is a big spoiled baby. A talented spoiled baby.
And just like that, I see Jack's great conflict in his life. It's with his own past: all anyone wants to hear are the classic hits from his past (the Branson/Vegas fate), but Jack's ego won't accept that his best days are behind him. He keeps trying to record new material, and it's godawful.
This, I can understand. I could be making a very comfortable living tattooing full-time. I could make better than that if I opened my own studio again. The world is happy to reward the art of my youth. But creatively, I've moved on, and that's an uphill battle.
I've got my grip. I still don't like the guy, but he's mine now...
Posted by Steve Malley at 10:56 AM

Email ThisBlogThis!Share to TwitterShare to FacebookShare to Pinterest
Labels: an artistic metaphor stretched to breaking, character, creativity, in which the artist retreats once again into metaphor

Hey! I'm still the creepy old chick at the shows--although I stay well and clear of the pit. My forehead doesn't take boot heels as well as it once did. Not gonna let age stop me from enjoying the music I like live.

Anyway, protestations aside, great post. I always wondered why the Storm Troopers just stood there, too. Did they really believe in the Empire, or were they just there for the paycheck? They're definitely questions the author needs to know the answers to, even if no one else ever hears them.

Sarah has plenty of heat!

Great post, as usual, Steve. And how do you find such amazing photos to go with your posts? They are always excellent, and usually also are visual puns.

Avery, I still take in the odd show m'self-- harder in NZ's South Island than, say, Chicago's South Side, but sometimes. So far, none of the kids have wanted to go down to the basement for a popsicle, though...

And I kinda figure the Death Star didn't have ground forces. On Tattooine, Ben's all, "No one shoots this well but Storm Troopers," but when the Death Star's invaded, they must've been handing blasters to the janitorial staff or something!

Charles, I forgot you had a copy of that story!

Anybody else want one? Shoot me an email...

Sphinx, I spend whole minutes at a time searching google images for those! Glad you like 'em.

I really loved seeing your go through the process of figuring this guy out and I think it works. I like characters who are assholes (not personally, but you know...) -- the world is full of them and they make stories far more interesting -- I just them to be genuine and motivated and I want to understand what makes them tick and you've done that. Thanks for sharing!

I have struggled with such characters, too, but with less success than you in figuring out how to fix them. Thanks for the useful post.

Then there's the opposite problem—where you know your character inside and out and what motivates them and why and they feel so alive to you that you know exactly what they'd do in any circumstance—and then one of your readers can't make any sense of the character.

Lisa, one thing I try to keep in mind-- *everyone* thinks they're the hero, even the villain!

Voldemort was on a heroic quest to realize his own grand destiny. Would have worked, too, if it weren't for that meddling Potter...

Shauna, I get that too. The remedy is to go back to your sequels and *really* paint it on the wall. 'Jack's afraid to go up the hill. He's not a good climber. But he fears losing Jane even more...'

I always think I've been clear, but my beta-readers often correct me!

It's always hard to look at our own characters and see that they are unique and that they 'work'. It's because we know them so damn well. Kudos to you for finding ways to make them stronger. Oh, and I love the labels Major and Minor Bastards. Might have to steal those ;)

Then I'll try laying it on thick! Thanks, Steve.

What a great insight. Everyone does think he's the hero -- no matter how flawed the rationale...I'm going to remember that. Thanks!

Shauna, happy I could help. Like I always say, take what you like and leave the rest.

Lisa, I was just watching the new Battlestar Galacta remake on DVD. It struck me how the new Cylons were seriously well-rounded. The old ones seemed to be there to give the heroes something to shoot at, but the new guys, they really *believe* they're doing the right thing!

Makes it even creepier, I think...

"So far, none of the kids have wanted to go down to the basement for a popsicle, though..."

Um, I really hope that doesn't mean the way it sounds.

That's Herbert, the old man in Family Guy. Which is how I feel at the average punk show.

Sadly, most of my old favorites are dead, retired or have talk shows. Only Iggy Pop stays strong...

A wonderful rumination on character, Steve. I don't know why it suddenly appeared for me, when I've been hitting refresh for days now, wondering why Steve Malley wasn't posting anything.

I'm still working on my General, trying to find what makes him click for me. I think I may have found it by giving him a fear. He was too fearless and capable before.

Hi Candy, glad you enjoyed it.

Happy to hear your general's working now, too!