Conflict and the PPK

Not that kind of PPK. Sure got your attention, though, didn't it?

I seem to be growing heavy with book once again, so my thoughts seem to be turning more and more to craft. And the ways craft goes wrong.

Conflict is the heart of story. It's the heart of life. From cradle to grave, we fight. We compete for attention, for resources, for love. We fight to be better people. Even given everything we could ever possibly want, we quest for the next challenge.

Small wonder that every moment in your story should contain conflict.

The only reason to have two characters in a scene together is if they want different things. Enemies, sure. Detectives and suspects or star-crossed lovers, of course. But even best friends, if they're going to share a scene together, will have goals at odds with each other.

Since I'm reading them at the moment, take Travis McGee. He and his best friend Meyer share one of the most memorable friendships in literature. But notice how often Travis is motivated by anger at the preditors and Meyer is hanging along because he's concerned about his friend. In most of their conversations, Travis's goal is get Meyer to help think up a way to get the bastards. Meyer's goal is keep Travis from going off the deep end or help my broken friend to heal.

Early on, McGee's main buddy is the Alabama Tiger. They're close enough for the Tiger to lend Travis a speedboat in The Deep Blue Good-by, yet the Tiger never once shows up on the page. Why? No conflict. As drawn, the Alabama Tiger's needs are simple: booze and women. He has both on his boat, hence no need to leave. And no way to meaningfully interact with the tormented, hedonistic half-hearted Puritan, that reluctant hero Travis McGee.

Or consider Itchy and Scratchy. Remember when Marge got to make them 'just get along'? 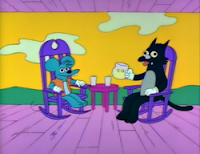 EXT./DAY, a front porch.
Itchy and Scratchy rock together on the porch, a pitcher of lemonade on a table between them.

Any conflict-free moment in your book is just PPK: a Pointless Pace Killer. Dead weight. It doesn't matter how prettily it's written, a moment without conflict isn't worth the paper to print it.

This doesn't just count for moments between characters. This is also the *real* reason that we don't spend pages watching characters brush their teeth, pee, balance their checkbooks, etc. 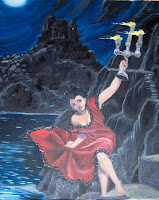 Lonely Tension: this lovely heroine is all alone on those slippery stone steps. Even though I painted this, I don't know where she's going, or why, or what she'll find when she gets there. The point is, her lonely midnight walk is fraught with tension. Like any burglar prowling a night-dark hall, or a lonely and bored housewife eyeing the sherry, the tension between the apparent quiet and the understood threat is a form of conflict.

Sequel: Lots of writers set their heroes alone with some stage business to get through the stages of sequel. A character may flyfish in an icy river, or sweat on a treadmill or do repairs on a houseboat as stage-business for sequel. But remember, sequel is emotions and thoughts, options and a choice. It's about frustrated desire and a fresh plan of attack. And that's a product of inner conflict.

***
SQT raised a good point in the comments: what about moments of apparently idle comaraderie? She cited John Sanford's detective novels, but other such scenes abound in literature-- the protagonist just sort of hanging out, shooting the shit with a buddy or two. What gives?

1) Act II Bump: One way to keep that Big Middle of the tale from going all soggy is to introduce a bit of random color as distraction: a vivid but pointless character (think Mike Yamagita from FARGO), an exciting activity (Freefall in Crimson features a hot-air balloon ride) or mysterious encounter (Dean Koontz loves to use slightly unearthly animals) or a good story (Andrew Vachss uses examples either humorous or harrowing). My first guess is, if you look at the place Sanford's funny stories appear, they'll come right when the second act needs a little bump.

2) Pointful Pace Killer: Every now and then, a storyteller will have a *reason* to kill the pace of their story. That random color in Act II might be one example of this, though I feel that use of color should still serve the general tone of the story. Otherwise, you may have a plot hole that needs patching, or a 'natural' break in the pace that needs glossing over.

For instance, your sleuth's quest for the truth is faltering, but a big break falls in her lap. To keep the break in logical progression from being too jarring, you throw a little misdirection at the reader. Disney does this all the time with their song-and-dance numbers, and therein lies the danger: those numbers are boooooring.

3) Indulgence: Then, as now, some writers got away with any darned shortcomings they cared to. Everyone makes money, but once editors fear to alter, it's the stories that suffer.
Posted by Steve Malley at 1:30 PM

This is a timely piece. I was just thinking I needed to go back and check the dialogue for the past couple of chapters in "wraith of talera" to make sure that more is happening than just the dissemination of information. Thanks for calling this back to my attention.

Nice sidearm. Can I play?

I think the conflict has to go back further, to the creation of the characters, as well. The characters need to oppose one another in some way or the story won't fly. Take Gone With the Wind, for example: you can have a Scarlett O'Hara, a Scarlett and a Melanie, or even two Scarlett's, but you can never have two Melanie's. Two Melanie's would just sit around apologizing to one another all day.

Charles, glad I could help! Remember my old post, Conflict and Laying Pipe?

Avery, you're onto something there. Scarlett gets her hands dirty to protect those frail and anemic flowers of the aristocracy, a sort of 'Saving the Kitten' move to make the awful things she does sympathetic.

But of those frail flowers, I vastly prefer Aunt PittyPat to Melanie. While Mel remains a cardboard saint throughout, Pitty's escape into madness is much more interesting.

I think you're giving Scarlett more credit than she deserves. But, I am a fan of Aunt PittyPat and her syncopal escape tactics.

Well timed, indeed. I'm in the midst of my nth rewrite of Deadlight because I realized I'd lost the fun conflict that sparked between my two protagonists in Archangel.

This is why I write in narrative, my feisty NZ friend. I can "create" conflict through the eyes of my narrator (usually me *sigh*) regardless of what the scene is. No more photos of guns, dude. Balloon animals would be nice...

I agree... mostly. But shouldn't there be moments of camaraderie? I mean, doesn't it get old if the main character is always at odd with someone?

I'm thinking of one of my favorite authors as I write this. John Sandford writes detective novels and I love the scenes where the main character is shootin' the sh** with his cop buddies. Usually there's a funny story about his wife-- or something like that-- put into those moments and they crack me up.

"I seem to be growing heavy with book once again..." *LOL* Great imagery there!
Speaking of Itchy & Scratchy in that episode, I love the rewrite of their theme song;
They love and share
And share and love & share
Love love love
Share share share
The Itchy & Scratchy show!
...While heaping each other with flowers & heart shaped boxes of chocolate. Gads, I LOVE The Simpsons!
Good luck with all of that conflict, though!

CS, happy to be of service!

SQT, I'm going to have to think about that one. I'll get back to you tomorrow. :-)

Lana, if I ever have a band, I'm going to call it 'The Moe Szyslak Experience'!

Of course, the fact that I can't sing, keep a beat or play an instrument might be a problem...

Thank you, and am glad you are enceinte.

When I was training to be a teacher, I read one of those 'How to Study English Literature' guides which said that all literature is about the conflict between the individual and society. There's truth in that, I think.

Donald Maas in a seminar I often refer to spoke of "having tension on every page." If it's a conversation, can it be an argument instead?

He cited Perry Mason books as masterful examples of tension on every page, and that's true.

Recently while rechecking conflicts in my last rewrite I found some soft spots that seemed lacking impulsion for the reader. Interesting how time away helps a manuscript when you look at it again. I wrote more conflict into the scenes, and here you are writing about it. What a coincidence.

Bernita, thanks. I'll write more about it tomorrow.

Glamourpuss, you may be right. Even when there's zombies in...

Barbara, coincidence abounds in life. In fiction, just don't use it to get your hero out of trouble.

Conflict is the key!

You learn something every day :-D