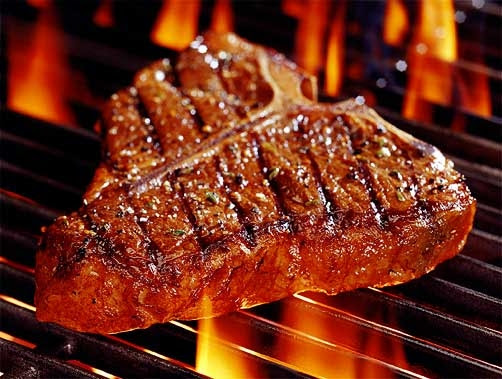 Something Andrew Vachss said in an interview once really stuck with me. For any of you who don't know, Vachss is a man who has dedicated his life to exposing and punishing child molesters, and his authorship is one aspect of his mission. Unlike so many with axes to grind, he's actually damned good.

Asked about this, Vachss made an analogy to a steak: if you take a piece of meat without a bit of fat on it, the thing is going to taste like cardboard. You need a little bit of marbling to give the meat a bit of sizzle, a bit of taste.

This week I've read the first three Travis McGee books and The Little Country, an older work by another favorite, Charles DeLint. The first thing that struck me is sizzle.

A big chunk of what makes the McGee books so compelling are Travis's riffs on society, culture, our humanity and inhumaity and the strange, sad, savage journey we all make from cradle to grave. John D. MacDonald vents his anger and sorrow and love, his world-destruction fantasies and, ultimately, his pride as our frail and foolish species rages against the dying of the light.

A bunch of years ago, I thought JDM wrote his novels in order to publish his rants. Later, it seemed to me that he put those wonderful, compelling riffs in to flesh out his slightly skeletal stories.

MacDonald's writing is deceptively elegant. Like a well-marbled steak, his work is threaded through with entertainment and flavor. For example, both The Little Country and The Deep Blue Good-by follow the time-tested structure of scene and sequel.

Throughout The Little Country, the protagonists act, assess, then act again. This structure is unobtrusive, and it keeps us grounded in the believability of the characters' actions. It's well done.

The first chapter The Deep Blue Good-by, McGee acts: he refuses to help the damsel in distress. Chapter two, McGee goes to a party, drinks a little too much, has sex with a stranger, drinks a little more, riffs a little bit on the emptiness of his life. The whole chapter is all of five or six pages, and it does an amazing amount of work:

1) McGee's dissatisfaction and ennui is plain and convincing. We understand why he's going to take the job.

2) McGee is revealed as a complicated character: his conscious and unconscious desires are wildly at odds. He tells everyone, including himself, that all he wants is laziness and pleasure, and stealing from thieves is a way to afford this life. But faced with just what he professes to want, we see, even if he doesn't, how much he despises the prospect of endless frivolity. He *needs* to do a good deed in a bad world.

3) We get a peek into a hedonistic lifestyle that for most of us is alien and exotic.

4) We get one of those marvelous mini-essays, dripping with mid-60's angst.

And JDM does this kind of thing throughout the book!
Posted by Steve Malley at 11:54 AM

These are some prolific authors! Although admittedly, hard boiled stuff isn't favorite genre to read, but the characters and the subject matter are always interesting to me. I am especially curious about Vachs and his wife and the work they do. It strikes a chord in me...

I love those little asides, rants, whatever, that JDM uses. It really brings the charcters to life and the writing as well. You're right, without those the books might be pretty short, but with them they are just wonderful.

You've convinced me. I'm going to seek solace from the insanity my life has become by reading a stack of JDMs!

Oh, maaaaan! Now you've got me jonesing for a nice, juicy steak!

Lisa, he's got a *very* exhaustive website, with nonfiction work, links to organizations he works with, sometimes updates on his various efforts and causes.

I had the good fortune to hear Vachss speak for a couple of hours when he was promoting SHELLA. (I also had the good fortune to get a signed first-edition of that book, only to lose it to a very sweet-natured stripper named Parrish, but that's neither here nor there) Andrew Vachss was one of the most concise, eloquent and smart people I've ever met.

Charles, those little riffs practically raised me, growing up.

CS, check out the structure in Deep Blue, where he props the second act up by introducing this creepy, dysfunctional family, then props *that* up with a fistfight. Guy's a nut.

Lana, I'm hankering for one too. This part of the world, they call a Porterhouse a Scotch Fillet. No idea why.

Seriously, love your observations on JDM's work. I gotta go back and reread some of his books...it's been years. He is one of the greats.

I admire Vachss' dedication to his cause and and respect his continuing efforts over the years. I don't think I've read any of his books--although I probably have at least one somewhere among the innumerable stacks of my TBRs. Perhaps I've delayed reading him because of the nature of many of his stories, reaching right down into our deepest fears for our own children.

Sphinx, that discomfort is just what he wants. It leads to action. As he put it, humans are the only animals that tolerate their own predators. Like you'd tell your kids, 'Be careful in the pool. There's a shark in it, but they usually don't attack in shallow water.'

Forgive my utter ignorance, but does he write crime fiction? You've made me want to read him now, and ever since I was at uni, summer is for crime fiction.