The Gray Borderlands of Immortality 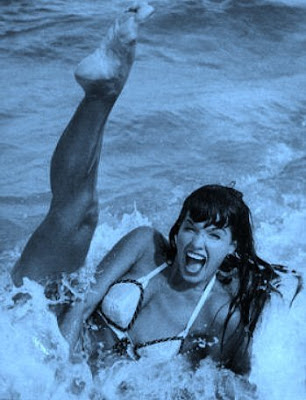 Bettie Page's death last week shook me. It also got me thinking.

Early exposure to Ms. Page had a profound effect on my art, my libido, and my career. It's not unfair to say that my visceral reaction to this young lady shaped my life.

But what, exactly, was doing the shaping? It strikes me that the Bettie Page we were all so sad to see go was, well, already gone.

Bettie was a pin-up model for seven years. In those few years (1950-57) she became one of the most photographed women in the world, and the better of those photos (she was often shot by rooms full of untalented amateurs more concerned with seeing her naked) were enough to make her an icon.

The Bettie we see is 27-34 years old, always. Forever. Years before I'll admit to being born, this woman who changed my life hung up her garter belts and went to work for the Rev. Billy Graham. That wee nymph up there frolicking in the surf was gone.

Except that she isn't. Bettie, *that* Bettie, is immortal. And ageless. Like thin Elvis, sober Marilyn or young Marlon Brando. Or old Leonardo daVinci. Or bearded Abe Lincoln. That part of her life has been frozen and cut away from the usual march from birth to death. I remember when the rumor was that she had already died, years ago in a mental hospital. (She was committed, but for 20 months only) Finding out she was alive and unaware of all the fuss gave me a warm fuzzy feeling, but really, deep down, it didn't matter.

Those pictures were what was important.

The real woman's gone now. The loss hurts for some reason, but I don't know why. I never knew her, might not have gotten along with her if I did. The thing that influenced my life (it's alive, it's powerful, but it isn't human-- I don't know what to call it) is still alive and well, possibly more powerful than ever, now that it is free of the troublesome human it was once chained to. I don't know.

I want to say this is a construct of our media. Young Johnny Cash, whacked out of his head on speed, sings Big River on my iPod several times a week. Rita Hayworth breaks my heart a little any time I care to fire up the DVD player. Somewhere in the world right now, Marilyn Monroe is having her skirts blown up by that same damned subway grate. 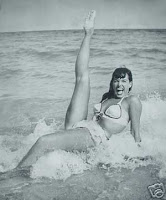 But our media is only our servant. We invent the damn stuff to make our campfire tales more efficient, to do the things to us that we've been doing in one form or another ever since we crawled out of the trees.

Cúchulainn is forever raiding cattle, Herakles doing penance for one *nightmare* drinking binge, Gilgamesh wrestling that damned serpent. Somewhere in the world, right now, Achilles is dragging Hector around behind that same damned chariot. We won't let them die either, even after we've forgotten whether or not they ever existed...
Posted by Steve Malley at 10:10 AM

Email ThisBlogThis!Share to TwitterShare to FacebookShare to Pinterest
Labels: in which the author ponders mortality and immortality and the strange spaces in between

Very thought provoking post. You're right. And maybe those icons become even more alive after their inspirations are dead.

And how much too, the icons of our youthful reading, who never lived nor died, except within us. John Carter, Travis McGee, Rye Tyler, the Sacketts, Batman, and on and on.

Interesting. In this light, our own creations live forever, too. Don't forget that. :)

Good post, Steve, and correct that Bettie Page will live forever at the age she is most remembered.

I've been thinking about the power of myth as Christmas approaches. Santa Claus is as real as we want him to be and as important, I think, as we want.

I always wonder how Marilyn Monroe would have been remembered had we seen her age. We forget how many icons we see grow old, like Elizabeth Taylor or dare I say-- Michael Jackson. I so wish I could only envision Jackson as the "Thriller" version.

She was very beautiful. and forever immortalized as you say. I agree with Lana - your creations do live forever.

Happy holidays and have a wonderful new year.

I think this has to go down as one of my all time favourite posts!

Merry Christmas to YOU and Yours :D

"Marilyn Monroe" was as mythical a creation as Gilgamesh. I've read that Norma Jean could go to the grocery store at the height of MM's popularity and not be noticed . . . unless she became MM. So what we think of as "Marilyn Monroe" truly does still live as much as she ever did. Perhaps that holds true for many or most of our iconic and mythical figures.

I suppose it's the power of myth. I recently had similar thoughts when I saw an ad for a program featuring the YOUNG Henry VIII. For us he's always old, ill, bearded, and obsessed with getting an heir before he dies. Once he was young and hale and virile, but that's not the way we see him.

thats why i have nudes of me while I'm still semi defying gravity..
i like looking at them and thinking ..thats me :)

Our icons doubtlessly embody part of our collective psyche and transcending their reality is a necessity. I'm not sure where the media fit in, I the need for heroes has always existed - as your reference to the Iliad illustrates. I guess the medium has just shifted.

It's all a little bit of self-delusion, isn't it? I was watching Bad Santa (a requisite holiday tradition in the DeBow household) and started to get upset about both John Ritter and Bernie Mac. So, I made myself forget they were gone. There they were, on screen, vibrant and healthy and alive, so it really wasn't that difficult to do. I tricked my little monkey brain into ignoring the fact I was watching two ghosts talking about back-door exploits.

The lady behind Bettie Page is gone--as you said, long has been--but her force, her presence, that's what made her so famous, and that's what will ensure her survival in American mythos.