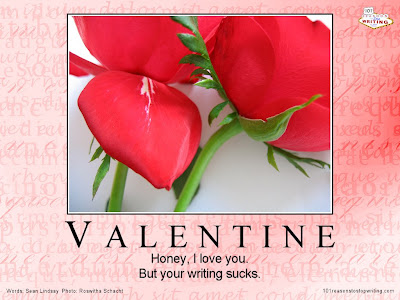 Blatantly stolen from the brilliantly-titled Bookgasm,


50 Reasons No One Wants to Publish Your First Book

(click the 50 Reasons to go straight to the post-- the bookgasm link takes you to their latest entertainment!)

A few of my personal favorites:

#46. Historically, books written solely to settle a bar bet seldom make it to print, especially if they were written during a seven-and-a-half-hour period in the same bar where the bet was made.

#43. Writing a 97,236-word thesis arguing the inherent superiority of Wolverine over Batman is intrinsically flawed since no intelligent person could ever take it seriously. I mean, c’mon, Batman would kick that midget Canuck’s ass every single time!

(that one made the whiskey fly out my nose!)

Email ThisBlogThis!Share to TwitterShare to FacebookShare to Pinterest
Labels: frippery, links instead of content, reasons many fail and their bleached bones pile high on either side of the path we tread

Oh wow. They're all pretty funny, but even though this was kind of mean, this is the one I almost spit my water out over:

27. You know the talented creative writing professor who told you your work showed so much creativity and promise? Turns out what he really meant was that he wanted you to blow him.

Lisa, that was another of my favorites! :D

Egads but some of these are South Park gross.

If I had been drinking whiskey, it would have been flying out of my nose too. That was pretty funny. I wasn't so sure about getting this book, but now I think I might have too. It has some pretty interesting ideas.

Unfortunately I've come along so late (I've just been too busy,) that it seems the 50 reasons post is gone. I appreciate the ones you've shared, though. :)

Lana, the link worked for me. I'm sad you missed it!

One could have a lot of fun with this concept!

I wonder how many of these are based on actual queries to agents and editors. My favorite was "37. You may want to revise the query letter you’re sending to agents so it’s more about the book and less about how much you love kittens."

I found the link further down in the archives for March 17th, and most were funny, some not.

"You know the part where the protagonist stuffs those puppies into the wood chipper? It’s not quite as funny as you seem to think."

The only one that made me laugh out loud. What does that say about me?

I think I have to go along with Lisa and say 27.

My favo?
You of course -p

But, where are You???
Is everything ok?