So this one time, I'm working a day job at the State Zoo. Just flunky work, but it kept the bills paid.

It was Easter Weekend, the single biggest family day of the year. Problem was, the dolphins were, well, feeling a bit of spring fever themselves. They were shagging all over the place, and management were freaking out.

In just a couple of hours, the zoo was going to be filled with impressionable young children. They'd see copulating sea mammals. There'd be moral outrage. Funding would be pulled, people would have to apologize on Oprah or something.

"There is one chance," said the Head of Marine Research. "Baby seagull meat has the proven effect of reducing, possibly even eliminating, a dolphin's libido."

Much smiling and hand-clasping all around. Except for me, of course.

I got a stick and a sack and directions to the seashore.

So I set off. It was a fair walk through the forest, but spring was in the air and I had my earphones and the radio to keep me company. It wasn't so bad.

The zoo was having an awful day. There was a big announcement on the news that one of the lions had broken loose. Fortunately, the keepers had put a few tranquilizer darts in it before it jumped the fence. I walked carefully, but saw nothing.

It was a great morning at the seashore. The sun was warm, the air crisp and salty. I went up and down the sand with my stick until the sack was stuffed full and dripping with baby seagulls. Time to head back to the State Zoo and a day of mucking out cages.

But on the way back, what did I see? The lion!

This great, tawny beast lay right across my path. The empty cylinder of a trnaquilizer dart still hung in its flank. I stood a moment, listening to its great, rumbling snores and looking from side to side. There was no way around through the thick trees.

I was as quiet as I could be. Gently, I crept up to the sleeping lion. I raised one foot, moved it slowly over the dangerous cat's body. I didn't dare breathe.

Just as my toes set down on the lion's other side, a cop jumped out from behind a tree and cuffed me.

"But, officer, what's the charge?"

"Transporting young gulls across the state lion for immoral porpoises!"

ANd for suffering through that joke, you may have a mock cover... 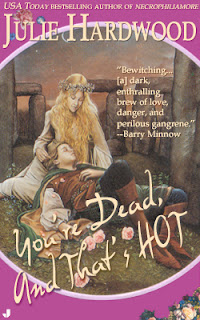 Email ThisBlogThis!Share to TwitterShare to FacebookShare to Pinterest
Labels: frippery

There once was an old lady whose husband died 20 years ago. She was so lonely and was closing in on the final curtain herself. She began to think to herself that she would die having never been sexually satisfied considering her husband was a five second man and her oath of monogamy stayed true even after his passing. She decided that she must experience sexual bliss before she died and that was that.

The next day she went to one of her friends to ask advice on getting some action. Her friend was quite surprised yet knew just the thing to set her right. She told the old lady that she was given a magical golden penis that with its mystic powers could even make Aphrodite herself moan with delight. The old lady said that she must have it, if only to try it once. Her friend conceded and went to the attic to get it. On her return she carried with her a cedar box. Its shape resembled that of a shoe box, and golden leaves and branches were inlaid throughout the wood. The friend did not open it, she merely said these words: “here is the golden penis. Whenever you want the powers of the penis to come alive, you must open the box and say, “Golden Penis, Golden Penis, followed by wherever you would wish it to go. Do you understand?” The old lady nodded and dashed from the house with school girl giddiness.

She ran the block it was to her home and locked the door behind her. Once inside her bedroom she disrobed and laid the wooden box on the bed. Slowly slipping the lid off she was astounded to find a foot long shiny golden penis lying in blue velvet lining. She could not remember ever laying eyes on something so powerful and commanding yet something with such beauty and light. She closed her eyes and tensed her sagging old bones and said these words:

With a flash it entered her. The old lady gasped, turned and fell back onto the bed. The metal rod moved this way and that, swayed in and out as it attached to the hips of some Latin lover from spoken lore. She began to breathe heavier and heavier, ripping at the sheets with her hands, curling her toes till they pointed skyward and circling her hips to the movements of the protruding device. And then it came….the thing that she had never experienced in her long life. Her body exploded from the inside and she let out such a scream that even startled her. Ecstasy rolled its way through her again and again. And then again, and again and yet again. She let it work for by this point she could not speak, which meant she cold not stop it. Her body gyrated back and forth and her tongue twisted itself useless in her mouth. She panicked. She rose still naked and still with object inside. The orgasms rolled through her over and over, she could not escape it. She pried with her hands to free the golden penis but in her it stayed continuing its godly work.

In total fear and pleasure she ran from her room and out the front door onto the lawn. She ran with great unease toward her friend’s house for assistance still exposed and all. As she left her yard it hit her, a great pain in her chest. And in an instant the old woman died on the side of the street, nude and holding a Golden Penis between her legs.

Susan and Steve were driving down the road in the green Chevrolet truck. As they turned down a back street their eyes met an amazing site. There lay a nude old lady on the sidewalk appearing not to move. Quickly they stopped the truck and jumped out to see if she was alright. Susan leaned down to take her pulse and found nothing to take. She looked her over and discovered that something was coming out of her…

“What the hell, dude?” Steve asked.

There is a golden penis in that woman’s you know where.” Susan exclaimed.

Steve, unable to see from his angle behind the truck, laughed at Susan and said…..

Dude...feel free to delete it if you need to, your post made me thing of it.

i like! but not as much as "you're dead and that's hot!" hehe

Hey, you writers should club together, here's another blogger i visit often - she's an amazing writer - http://thechardonnayfiles.wordpress.com/. Truly!!!