Dead Horses Beaten, Some Not Enough 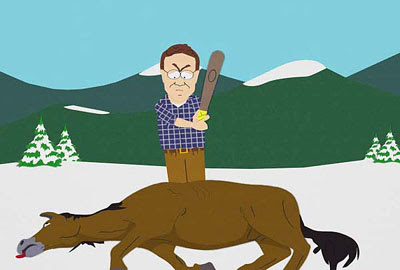 Just a few dead horses I want to whup on a little before I move on to other topics.

One final word on scene and sequel: to pep those sequels up, add a little sizzle. Don't just finish a scene and have your characters walk through steps 1-4. Here's some free stage-business to put in your tool box:

Talk it out. Disguise the sequel-steps in dialogue. Elmore Leonard uses this a lot, so did Eugene Izzi.
"You okay?"
"What do you think?" Frank rubbed his shoulder. It hurt like hell.
"Buncha guys in Halloween masks just tried to throw you out a window, is what I think."
"Assholes just wanted to scare me, is all. Fuck em."
"Maybe we should cool it awhile," Eddie said.
"You know we can't do that."
"So, we still going ahead with the plan?"
"Nah. Won't work now they're on to us. We need something new..."
The two men smoked in silence. Eddie watched the models on the infomercial pretend to use the abdominator.
Frank stubbed out his cigarette. He had that look in his eye.
"Your sister still work at the DMV?"

Telling locale. Like eye-gouging, location is a cheap trick that WORKS. Put your character in a location meant to evoke their inner state and let the reader draw the parallels. Put your heroine in a big empty room, shivering in front of a window as she looks out at the cold dark night. Tell us her husband isn't home yet. When she picks up the scissors and marches into the closet, we'll fill in the blanks.

Sex and Violence. I could have just called this give 'em something else to do, but notice how I got your attention? Let your viewpoint character work through their sequel-steps during moments of intense other-business to keep the reader flipping pages. James Lee Burke uses sex scenes brilliantly for this, and James Ellroy does a bang-up job using violence.

Maybe the best examples are from the worst medium for sequel: the movies. Luke learns Darth Vader is his father in the middle of a swordfight. He feels the pain, sees the truth, loooks at his options (though we're all pretty sure he *won't* pick join me on the Dark Side) and chooses suicide. The near-climax of Grosse Point Blank, John Cusack's expository dialogue with his ex and her father is just sequel-through-dialogue (since it's all about *his* feelings, thoughts, options and decisions), made *extra* distracting with a gunfight!

My last word on sequel: how much you dwell on the emotion, the logic, the various options open is a matter of taste and context. The REALLY IMPORTANT thing is that your character emerges with a new decision about their next action.

Sloppy writing may in fact turn out to be a more serious problem - outright theft.

Now, personally, I don't see the literal transposition of out-of-copyright material as theft: sloppy, lazy and boring maybe, but not theft. The whole point of copyright is that the creator gets a period of time to enjoy the fruits of their labor, *then* that creation passes into the ongoing dialogue that is our popular culture. This helpful video explains it well, and points out how Disney is trying to bollix the whole concept. Ironic, considering uncle Walt built his early empire on out-of-copyright creations like Pinocchio, Snow White, Cinderella, Sleeping Beauty, etc...

My point was, Edwards may have been too lazy to put her research in her own words, but she wasn't breaking the law. Bad writing is bad, but illegal. This matter with the similarities between Savage Dream and Laughing Boy may be a different story.

For me, it's certainly a scarier one. At least some of that *may* have been unconscious.
Looking down those lists of similarities, I see a *lot* of poetic imagery. Good, 'sticky' imagery. Now, Edwards may have been sitting with old books, scissors and paste, gleefully assembling the latest tale with maniacal laughter, or Laughing Boy may have made a bigger impression on her than she knew. I know James Lee Burke once described a 'sky like torn plums', an image so powerful and evocative that it sticks with me long after I forgot which book it came from.

I think Ms Edwards's life is about to unravel. I foresee a future of lawsuits and disgrace. It's a harsh price to pay for laziness. Harsh, but maybe fair...
Posted by Steve Malley at 12:34 PM

Right on, Angie.
Steve, thank you for the further sequel.
Now, if I can just apply your excellent advice...

I like the picture you've chosen for this one. ;)

Sure wish I could use "a sky like torn plums." Man that was a good one.

Good post for thought. This issue is coming up so much here lately. Good point about what is illegal and not illegal "borrowing." Also, the charge of plagiarism is being thrown around sometimes rather cavalierly. Some people are using it as a weapon, like racist or...liberal.

Good suggestions for keeping a story moving through sequels.

As for the other matter...I find myself wondering how many other writers do this? I suspect Edwards thought that having been published in 1929, this book was out of copyright. I also wonder what the Smart Bitches would find if they started subjecting other authors' books to the same scrutiny.

I've really enjoyed catching up on your "sequel" posts. Good stuff! Thanks!

Angie, you're quite right.

Charles, I think this is the future - anyone can google, making it that much easier for what's done in the dark to be brought to the light.

CS, I just wonder how long it will be before pubishing houses have interns googling their authors' info-dumps and best turns of phrase...

What the hell does that mean? I'm trying to picture it, and all I keep getting is the image of Amelia Bedilia "pruning" the hedges. Do you actually get a helpful mental image from that?

Oh, fine. I'll go to the slow-kid class. But, just so you know, I'll be dragging my feet like frosted Cheerios.