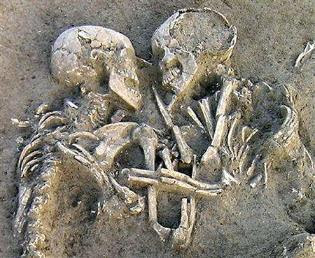 So my well earned rest. Yeah.... That lasted about 36 hours.
A good day's rest, and I realized I was short one chapter in the denouement. Then I realized that I needed to give a minor guy just a little more time earlier on, to establish a relationship that comes in handy later.
And of course, there were all those small details: Character name changes, eye colors, traits that grew over the course of the book, etc.
Next thing I knew, I was back at the beginning, working on an immediate second pass.
The literature mostly counsels a long wait between drafts, but I actually *prefer* a quick second draft. Or as I think of it, a second pass. The material is still fresh in my mind, the story structure hanging in all its fractal beauty just behind my eyelids.
This pass is just about smoothing out the rough spots. Reconciling irregularites and adding the bits I left out in my headlong berserker rush to the end.
Only in writing can we rush to the climax, then go back and arrange proper foreplay! ;-)
This quick second pass has me thinking about this particular novel (working title: Crossroads Blues) and its odd, twisting genesis.
For instance, is this really the second draft? I had two false starts and numerous wrong t 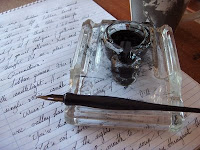 urns finding that sweet spot where the story ripped free. The total word count in my various versions is over 200,000 words, and as faithful readers may remember, quite a few of those were paid down with a dip pen. A. Dip. Pen.
That was a *lot* of hard slogging, and looking back, I can see the problems.

#1) I tried to save my darlings.
Early on, I wrote three or four REALLY STRONG scenes. They HUMMED. You got character. You got conflict. You got plot. These scenes flew on greased rails.
They also didn't fit. For example, the big fight I wrote (in which I learned so much about the hero) pushed things too far, too fast. It was more of an ACT II climax than an ACT I intro, and it left no believable course for the characters.
#2) I wussed on my characters.
My hero is a drifter. The Minor Bastard is a narcissist. The Major Bastard is, well, he's the kind of thing children fear lurking under their beds.
But in those early drafts, the Major Bastard was too wishy-washy. The Minor Bastard was deeply concerned over the pain he caused. And the drifter?
He had an apartment.
Agh!

The trouble was, those scenes that hummed, I couldn't change the characters without losing those scenes. And I was *really* trying to keep those scenes!
Trying to hold onto those darlings almost cost me the book.
Fortunately, Kate issued her challenge, and I accepted. I started over completely: word one, chapter one, full committment. Full throttle.
The book works. At least, I think. I'll read it sometime around the New Year, but it feels good, y'know?
The darlings? Dead. Dead, dead, dead, dead.... dead.
Posted by Steve Malley at 11:06 PM

Email ThisBlogThis!Share to TwitterShare to FacebookShare to Pinterest
Labels: A holiday most rejuvenating, finishing a novel, revision process, slow murder

I like a quick second pass too, because I think it allows me a better chance to catch large scale errors. I think I do better with the small errors after I've gotten some distance from the manuscript. I'm sure you did, but save those Darlings in another file. They may find their way back into your life one of these days.

Awwwwwww...those skeletons remind me of Charles & I. Congrats on getting some rest!

I'm with you and Charles; a quick second pass is a must. There are things that are just too fresh in my mind for me to let sit until the "proper" time has elapsed.

In my computer files there is a folder full of my "deleted scenes." They're former darlings that needed murdering. Some I killed right away. Others took me a lot longer to realize I needed to let go.

I go back over my books as soon as I finish; I need to look at them when I'm still holding everything in my head. Then I like to set them aside to come back to with semi-fresh eyes.

And yes, murdering ones darlings always, always hurts. I'm much better than I used to be, but I still hand onto some things too long.

Thank you for sharing your process and thanks especially for this:

"Only in writing can we rush to the climax, then go back and arrange proper foreplay!"

Nice photo, mate. Can't add to what the Amazing Gramlich said. He always beats me to the blog replies. Must be the DSL. Or time travel.

Glad you found the challenge worthwhile. :)